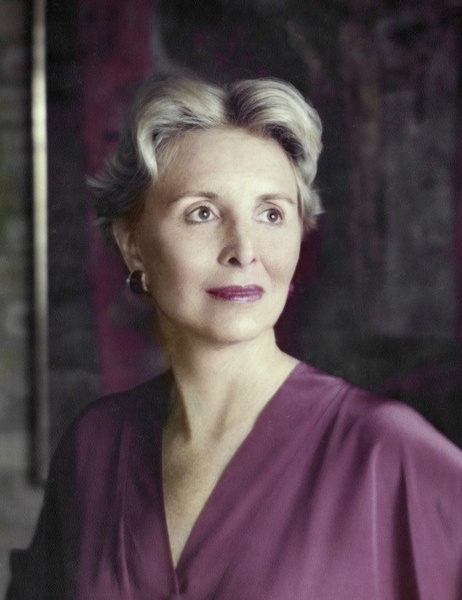 Sue Spivey Killam loved Laredo, Texas. It seems it was her destiny, from spending summers in Mexico City (she once met Frida Kahlo and Diego Rivera on the street!) to majoring in Spanish at the University of Texas at Austin, that she would meet and marry Radcliffe Killam and spend the rest of her life living happily in Laredo, Texas.

Born in Bonham, Texas, Sue was the second of the two daughters of Robert Morris Spivey and Florence Foster Spivey. A member of Pi Beta Phi Sorority and the Spanish honor society, she graduated from the University of Texas at Austin in 1941 and moved to San Antonio to work for the FBI. In the summer of 1942, she was asked by a sorority sister to be the date of Lieutenant Radcliffe Killam, United States Navy. They were married a few months later, on November 12, 1942, much to the surprise of Radcliffe’s family, who thought that he might never marry. Radcliffe always said that marrying Sue was the best decision he ever made, and they were inseparable until his death at 97 on September 8, 2007. Radcliffe served both in the Atlantic theatre and the Pacific during World War II, attaining the rank of Lieutenant Commander, and Sue lived in New York City and San Francisco while he was in training and overseas. They came home to Laredo for good in 1945, and the first of their four children, Susan Terry, was born in November, 1946, followed by Adrian Kathleen, David Winfield and Tracy Leigh.

Sue Killam truly loved living in Laredo. Not only did she appreciate the people and the culture of the border, but she also loved the South Texas brush country, with its unique beauty, wildlife, and hunting traditions. Sue was a crack shot, and became renowned for her dedication and skill at trophy whitetail deer hunting, winning first place in various categories in both the Laredo Cola Blanca and the Freer Muy Grande contests for 12 years running (2001-2013). In 2010, she was inducted into the Muy Grande Hall of Fame in Freer, Texas. The Mil Ojos hunting club on the Ortiz Ranch, established in the early 1950’s, was the place where she and Radcliffe and their friends and fellow members would gather for Saturday night cookouts, especially during hunting season.

In 1955, Sue and Radcliffe built their home on their ranch, and Sue’s artistic background and love of gardens were given full expression in the family home there. She loved having family and friends to visit, and was renowned for the tacos and tostadas, salsita and iced tea she served for lunch. Everyone knew Sue for her hospitality, beauty, grace and sense of style.

Sue also loved to travel and see the world. In 1960, she and Radcliffe embarked on a round- the-world trip, visiting Japan, India and Greece, among many other exotic and far-flung destinations, the first of many trips they took with friends. She planned these trips, and took copious notes on all the things they saw and did. But her favorite was going on safari in East Africa, staying in tented camps, cooking out on open fires, seeing the great herds of wildebeest and buffalo in the magnificent landscape that reminded her so of her beloved South Texas.

Sue Spivey Killam will also be remembered for her civic engagement, her steadfast support of higher education in Laredo and the State of Texas. In Laredo, Sue and Radcliffe were founding members of United Day School. She also served on the boards of the Laredo Philharmonic Orchestra and Mercy Regional Medical Center, and was a member of the Women’s City Club and the Society of Martha Washington. Other local recognition includes the Community Builder Award by the Laredo Masonic Lodge in 2002 and the Paul Harris Award by the Rotary Club of Laredo.

In addition, from 1979 to 1986, Sue was a member of the Board of Directors of the University System of South Texas (now a part of the Texas A&M University System). She and her husband Radcliffe were actively involved with the establishment in 1993 of Texas A&M International University in Laredo, and both served on the Texas A&M University Chancellor’s 21st Century Council of Advisors. They recognized that TAMIU would have a profound positive impact on Laredo by empowering people to transform their lives through education and professional advancement. Sue and Radcliffe continued to support Texas A&M International University through the establishment of scholarships, endowed professorships, support of athletic programs, and the establishment of the Western Hemispheric Trade Center.

On the State level, Sue Killam served in many leadership positions with the University of Texas System, including: the Centennial Commission, the Development Board, the Arts & Sciences Foundation (1965-1979), the Executive Committee of the Chancellor’s Council (1993-1994), and the Executive Council of the Ex-Student’s Association. In 1980, Sue and Radcliffe created an endowed professorship in Economics at UT-Austin and, in 1982, endowed a chair in pediatric genetics at M.D. Anderson Cancer Center in Houston. Sue Killam was a member of the Texas State Committee of the National Museum of Women in the Arts. In 1996, she was honored with the Longhorn Legacy Award for Lifetime Achievement by the Laredo UT Ex- Students.

The family will always be grateful for the loving care provided to Mrs. Killam by Dr. Ricardo Cigarroa and the Cigarroa family, by her wonderful caregivers, Grace Castillo, Mirtha Mendoza, Debbie Gonzales, Marisol Ceniceros, Nurses on Wheels and others, and by everyone else whose help and support enabled her to stay in her home until the end of her long and wonderful life, with especial thanks to Elia York, Sister Rosemary Welsh and Susie and Aurelio Villarreal.

In lieu of flowers, donations may be made to the Mercy Ministries of Laredo (956-744-5312, Sister Rosemary) or to the Sue Killam Memorial Scholarship Fund at Texas A&M International University, at giving.tamiu.edu or TAMIU KL260, 5201 University Blvd., Laredo, TX 78041.

To order memorial trees or send flowers to the family in memory of Sue Killam, please visit our flower store.