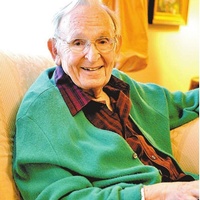 S tanley Alan Keilson was born in Cleveland, Ohio, on June 28, 1925 to Charles Keilson and Estelle Hurwitz and passed away peacefully at his residence in Laredo, Texas on Monday, October 15, 2018.His family moved to San Antonio, Texas, in 1939 and he graduated from Jefferson High School in May 1943, just in time to be inducted into the US Army during World War ll. Stanley initially served in the Philippines and then was moved to the island of Luzon in training for the invasion of Japan. With the war’s end, Stanley was honorably discharged with service honors such as the Good Conduct Medal, National Defense Medal, Victory Medal, World War II Victory Medal, and the Asiatic-Pacific Campaign Medal.

Upon leaving the Army, Stanley enrolled at University of Texas and then at Trinity University where he was actively involved in drama and received his BA. He left for New York, where he received his Master’s at Columbia University in 1952, which he immediately followed with work in Summer Stock in upstate New York. Stanley remembers being a student of famed Broadway star Gertrude Lawrence, and attending every Broadway play he could afford. He still remembers watching the great Jessica Tandy in her prime commanding the stage with the slightest gesture of her delicate hands.

Stanley joined the faculty of Laredo Junior College in 1952 as Theatre Director and Chairman of Department of Speech and Drama. He was subsequently invited as Guest Drama Instructor at Sul Ross College. But he wasn’t yet ready to leave his acting days behind him. Together with Hortense Offerle, he revived Laredo Little Theatre with delightful and successful productions, many which he directed and in which he acted. Some of his most well-known performances for both LJC and Laredo Little Theatre were as Henry Higgins in the now iconic 1965 production of My Fair Lady , Willie Loman in Death of a Salesman , and as Henry the great Shakespearean actor in The Fantasticks. Stanley retired from LJC in 1985, though he continued teaching part-time until 1992.

During and after that time, Stanley indulged his passion for global travel throughout Europe and the Caribbean. In 2014, Stanley was recognized as an “Icon of the Arts” by Laredo Theater Guild International for his contribution to the arts, artists and education. It was a magical night and remained one of the fondest memories of his life.

Stanley was preceded in death by his parents, Estelle and Charles Keilson, and his beloved younger brother, Dr. Gerald Robert Keilson, who passed away in Dallas the day before Stanley.

Stanley is survived by his children and beloved pets, Chulo, Silvie and Lucky, as well as loving supportive cousins, especially Sunny Wager, Ivan Hurwitz, and Syndei Levin, as well as Jeri Sorosky, Sandy Hurwitz, Jill MacLaine and Donny Hurwitz, and nephews Mark and David Keilson. He will forever be remembered by his longtime friend and traveling companion Dan Hancock of Baltimore, by Teena and Joe Arciniega of Laredo, and by many others who cherished his company as he did theirs.

Very special thanks to his wonderful housekeeper and friend of over 50 years, Francisca “Francis” Hernandez, and also to her granddaughter Yvonne “Bonnie” Ramirez.

We are grateful for the loving care and expert professionalism of his physician Dr. Luis Benavides and his efficient office team, plus his caregivers throughout the years, especially lead caregiver Myra Chirinos, as well as Sylvia Martinez, Ismael Juarez, Raquel Contreras, and Yaritza Palomares.

Stanley will be laid to rest on Friday, the 19th of October 2018 at Temple Beth-El Memorial Park, 1715 Austin Hwy, San Antonio, TX 78218. A Graveside Service officiated by Rabbi Marina Yergin will commence at 12:30 p.m.

A Memorial Service in Laredo, Texas will be announced at a later date. For more information, you may monitor the online obituary found at: www.joejacksonfuneralchapels.com

Temple Beth-El Synagogue
To order memorial trees or send flowers to the family in memory of Stanley Keilson, please visit our flower store.