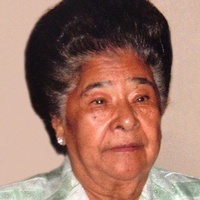 The family received condolences on Friday evening, May 17, 2019 from 5 to 9 p.m. at Joe Jackson North Funeral Chapel & Cremation Services, 1410 Jacaman Rd.; where a Rosary was recited at 7 p.m.

Funeral Services were held on Saturday morning, May 18, 2019 departing at 9:00 a.m. from Joe Jackson North Funeral Chapels to San Luis Rey Catholic Church for a Mass of Christian Burial at 9:30 a.m.

A private cremation will take place at a later date.

In lieu of flowers, a memorial contribution in her memory may be made to a charity of your choice.

To order memorial trees or send flowers to the family in memory of Santa Vasquez, please visit our flower store.