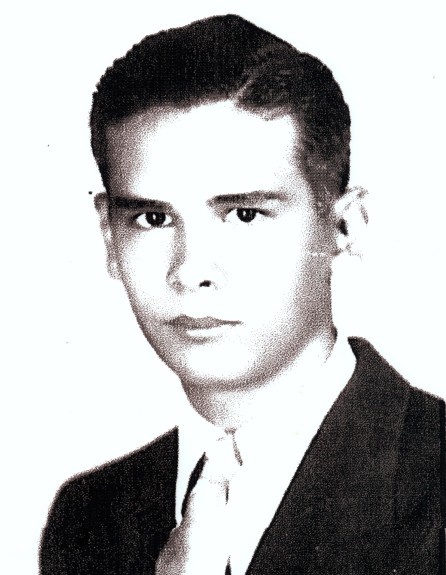 Samuel Tijerina, 98, joined our Lord in His heavenly kingdom on Monday, November 15, 2021.

Samuel Tijerina graduated in 1942 from Martin High School, and received a diploma from Southern Business College in 1947 for Business Administration majoring in accounting.

During World War II he was drafted June 7, 1943 and sent to the infantry replacement training center at Camp Roberts, CA.  There, he was trained as a squad leader and he was a sharp shooter.  He took an aviation cadet exam, passed it, and then was sent to Buckley Field in Denver, CO.  There, all infantry men were told that there was a surplus of pilots and that they could go back to the infantry or be a gunner.  He was sent to Scott Field, IL. where he was trained as a Radio Operator and Direction Finder Operator for lost aircraft.  He was sent overseas and assigned to the 147th Army Airways Communications System at Saipan, Tinian and Guam.  When Japan surrendered, he was interviewed and told he had enough points for an honorable discharge or if he would stay for at least 4 years they would give him the position of Communications Officer.  He chose the honorable discharge and was discharged at Fort Bliss, TX on December 8, 1945 with the rank of Sergeant.  He received the American Campaign Ribbon, Southwest Asia Pacific Ribbon, Good Conduct Ribbon, and Bronze Star for the Aerial Offensive against Japan.

He worked for the U.S. Government Civil Service for 39 years.  He worked for the Railway Post Office at the Houston, TX and San Antonio, TX offices.  He also worked at Laredo AFB, TX.  When the base closed, he transferred to the U.S. Customs in Laredo, TX and retired January 2, 1983.  He received 9 certificates for suggestions being approved, 2 certificates for Supervisor Management, 1 certificate for Outstanding Superior Performance.

His hobbies were playing Sunday morning softball with the Pearl Brewers, coaching little league with the American Little League, being a HAM Radio Operator, station N5NHR, and playing maquinitas.

The family will be receiving condolences on Monday, November 22, 2021 from 5 to 9 p.m. at Joe Jackson North Funeral Chapel & Cremation Services, 1410 Jacaman Rd.; where a Vigil for the Deceased and Rosary will commence at 7 p.m.

Funeral Services will be held on Tuesday morning, November 23, 2021 departing at 8:30 a.m. from Joe Jackson North Funeral Chapels to Our Lady of Guadalupe Catholic Church for a Mass of Christian Burial at 9 a.m.

The family would like to extend their most heartfelt gratitude to: Dr. Arturo Garza-Gongora, Alpha Home Health, VA Clinic, Patty Tijerina, and his caregivers, Raquel, Miriam, Amparo and Mari.

To order memorial trees or send flowers to the family in memory of Samuel Tijerina, please visit our flower store.