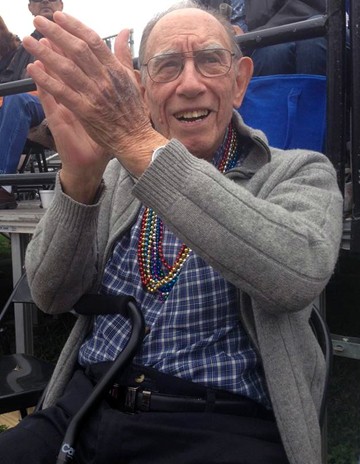 The Bratton Family would like to announce the very full, satisfying and rich life of their patriarch, Samuel Bratton, ended Monday, June 10. He fell asleep in death five days before his 102nd birthday, a detail that would doubtless cause him some annoyance, as he had been promised cake and tacos for the event by his daughter-in-law, Trina.

He was born at home on Victoria Street in Laredo on June 15, 1917 to Sam Bratton and Juanita Levrie Bratton. Sam, (as he was known to most of his friends once he outgrew the diminutives "Samuelito" and "Angostito") was the oldest son of six siblings: Elisa (Yates, formerly of San Antonio), Edmundo, formerly of Houston; Consuelo (Davis, formerly of El Cajon, CA.), Julio, formerly of Laredo; and Marie, currently residing in San Antonio.

He grew up playing in Laredo's dusty streets, swimming in the Rio Grande and helping out his buddies at the Martinez Ranch, El Patrocinio, on weekends. Here he made many close and life-long friends, including Fermin de la Garza, Juan and Jose Silva, Sam and Maurice Haber, Ramiro Martinez and Homero Martinez. He learned English in school and he graduated from Laredo High School in 1937; the very last class to graduate before it closed to become La Posada, and the very first class to hold its graduation ceremony at the then-new Martin High School. After graduating, he received a job offer as bookkeeper at Cantrell & Co. thanks to an enthusiastic recommendation from his high school math teacher. He worked there until his career with the US Army began in 1941. During that time he served as a Private 1st Class, Staff Sergeant, and 2nd Lt. in the Medical Administrative corps. He later resigned his commission to enter Military Intelligence and worked his way up to a top Warrant Officer rank of CWO3.

If asked what he liked the most about being in the army, he would respond with his famous sense of humor, mischievous grin and a single word: furlough! Obviously, though, there was much more that appealed to him, for he willingly chose to serve his country for 30 years. In addition to finding purposeful work and life-long friends in the army, Sam was able to cultivate his sense of adventure and satisfy his taste for travel. The military allowed him to live and work in many places, foreign and domestic, such as San Francisco, Pennsylvania, Carlsbad and Albuquerque, NM; Baton Rouge and Alexandria, La.; San Antonio, TX, El Salvador, Panama, Guatemala, Germany, France, Japan, the Philippines and Korea.

Being a native-Spanish speaker was particularly useful in his work. In Panama he received a commendation from the army for his intelligence work there and the Panamanian president, himself, presented him with a rifle as a token of appreciation.

While in Mexico City he met the dark-haired, green-eyed Sylvia Ruth Rosenberg of Detroit, Michigan, who was vacationing there with a friend. Overhearing her unsuccessfully bargain with a Spanish-speaking street vendor for a blanket, he opportunistically (or "gallantly," as he would claim) stepped in and procured the desired item at a good price for her, and, for himself, a date with his future bride. As it was the Dieciséis de Septiembre, the two ended up at the plaza at midnight to "echar el Grito" together with the rest of a festive Mexico City.

Sam and Sylvia married and had three children, moving wherever the Army sent them. In 1967, while stationed at Ft. Sam Houston, tragedy struck when Sylvia died; the victim of a drunk-driving accident. Sam moved his three young children to Laredo to live with his mother and brother while he completed his 30 years of military service, all the while traveling to see them each weekend.  When he reached retirement, he moved home and continued raising his children while earning his bachelor's degree in Education, magna cum laude from Laredo State University. He taught History and Social Studies at Nixon High School Annex several years before retiring again.

In his 70s, he joined a travel tour for senior citizens headed for Strasbourg, France, a place he had previously visited when in the army. He landed in France on another Mexican holiday: Cinco de Mayo. And as ironic chance had it, the designated host for his stay was a vivacious, retired doctor named Anne-Marie Wendling. They fell in love and a wedding soon followed. They lived happily in Strasbourg for nearly 30 years, traveling the world and to Laredo for yearly months-long visits, and generally behaving like they thought that they were decades younger. When Anne-Marie passed away in 2018, he returned to his beloved Laredo to live with his eldest son's family, expecting to be pampered and honored. He was not disappointed. He leaves behind many lessons and fond memories for the family and friends whose lives he touched profoundly.

Services will be held at a later date at Ft. Sam Houston National Cemetery in San Antonio.

The family would like to express their deepest gratitude and appreciation to: Dr. Milton Haber, M.D. for providing outstanding care; the doctors, nurses, CNAs, therapists and staff at Doctor's Hospital for the excellent care they provided and Las Flores Daycare and St. Jude’s Home Health Care who diligently tended Sam with such care, patience, skill and compassion.

To order memorial trees or send flowers to the family in memory of Samuel Bratton, please visit our flower store.