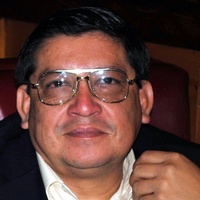 Mr. Ruben Martinez, 64, entered into eternal rest on Thursday, October 25, 2018. His wife, children, brothers and sisters were with him in his final moments as he awaited his entrance into the Kingdom of God.

While attending Martin High School, Ruben was very musically gifted and eventually received an invitation to be a member of the All American Youth Honor Band. After graduating from Martin High School in 1972, Ruben served 8 years in the United States Marine Corps ascending up the ranks to Staff Sergeant. During active duty, Ruben’s natural leadership skills allowed him to help in the mentoring and molding of several young Marines, and was instrumental in their own success. It is also here where his love for photography became evident, working as a photographer for Public Relations.

Early in his professional career, Ruben held numerous leadership positions at Seven Eleven and Popeye’s. Ruben Martinez retired from Coca Cola after 21 years of hard work and dedication. His infectious smile and ability to uplift any room will be missed by many.

The family will receive condolences on Tuesday, October 30, 2018 from 5 p.m. until 9 p.m. at Joe Jackson North Funeral & Cremation Services, 1410 Jacaman Rd.; a Prayer Service will be held at 7 p.m. with Pastor Tony Gutierrez of New Life Assemblies of God Church, officiating.

Procession will form and immediately depart to the Calvary Catholic Cemetery for the graveside service.