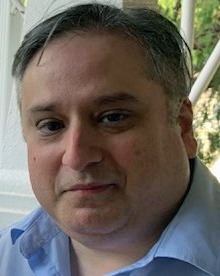 Rogelio Gustavo Juarez went to his eternal rest, unexpectedly and of unknown cause, on October 25, 2022 at the age of 51 at his home in San Antonio. Roy, as he was known by friends and family, was born October 10, 1971 in Laredo, Texas, the youngest child of Rafael and Ninfa Tamez Juarez. Roy's life was one spent in pursuit of all things meaningful. An easy-going, sensitive, and curious child, Roy formed friendships easily, first at St. Peter's Memorial School, and later while attending and graduating from Raymond and Tirza Martin High School. Through the years and across the miles, those friendships endured.

As a young man and in his college years, Roy studied classical guitar under Maestro Jose "Joe" D. Compean. Ever seeking to honor the great music he studied, he enthralled the listener as he played with precision and imagination, tenderness and intensity. When he wasn't performing classical guitar pieces, he was performing and touring in Texas and Mexico as a professional guitarist with musical bands, including Contra Punto.

After moving to San Antonio, Roy expanded his musical reach to include music production, studying at a college of musical technology. From his greatest love--music--to his interest in philosophy, his mastery of chess, and in his day-to-day work life, Roy sought always to learn, to do things right, and to do them well. In his personal life, Roy cared about people, their thoughts, their concerns, and their dreams. He enjoyed a good conversation, whether as part of an intellectual pursuit, problem-solving, or simply sharing funny stories, from the silly to the sublime. These qualities served him and others well in his professional life, too. While in San Antonio he worked in the area of technical customer service with a major technology corporation and more recently with a close-knit team at USAA.

Roy is preceded in death by his father, Rafael Juarez, Jr.; paternal grandparents Rafael and Eloisa Juarez, Sr., maternal grandparents Octavio and Lilia Tamez. He is survived by his mother Ninfa Tamez Juarez; his siblings, Rafael (Imelda) Juarez, III, Ruben (Pablo) Juarez, Cristina Juarez Galindo, Melissa Juarez, and Rebecca (Jeremy) Kennard. He is also survived by numerous cousins, nephews, and nieces. They remember him with love and hope for life of eternal bliss, as they await that greatest of family reunions in Gods heavenly kingdom.

Funeral Services will be conducted on Friday morning, November 11, 2022 at Holy Redeemer Catholic Church for a Mass of Christian Burial at 11 a.m. Family asks everyone in attendance to meet at church.

To order memorial trees or send flowers to the family in memory of Rogelio Gustavo Juarez, please visit our flower store.