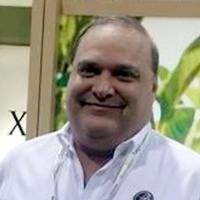 Robert Joseph Cremo, 51, a produce businessman, was unexpectedly called to Heaven by the Lord on Saturday, April 20, 2019.

Robert, also known by many as “Robbie”, was born in Laredo, Texas. A United High School Alumni, he played football for the Longhorns and graduated in 1986. After graduating, he completed a couple of years of college. He then played a huge role in helping his sister Blanca in caring for her small children. He taught them to swim, would attend their sporting events, and would stay up late with them playing PlayStation and eating their favorite pizza. Robbie was a beloved friend to many and was always down for a good time. Many of his friends referred to him as “brother”. He always looked forward to his hunting trips with Albert Martin III, one of his best friends. He was a true believer and had faith that God had a plan for him. Robbie will be missed by many, but mostly by his mother, Margarita Cremo, whom he spent all his life loving and trying to make proud – which he did in more ways than one – and his pride and joy, his son, Sergio Roel Cremo.

He was preceded in death by his brothers, David Cremo and Albert Cremo; and niece, Margaret Hill.

The family will be receiving condolences on Thursday evening, April 25, 2019 from 5 to 9 p.m. at Joe Jackson North Funeral Chapel & Cremation Services, 1410 Jacaman Rd.; where a Vigil for the Deceased and Rosary will commence at 7 p.m.

Funeral Services will be held on Friday morning, April 26, 2019 departing at 9:30 a.m. from Joe Jackson North Funeral Chapels to St. Patrick Catholic Church for a Mass of Christian Burial at 10:00 a.m.

Rite of Committal and Interment will follow at the family plot in the Laredo City Cemetery.

Arrangements have been entrusted to the care and direction of the funeral service professionals at Joe Jackson North Funeral Chapel & Cremation Services, 1410 Jacaman Road, Laredo, Texas 78041; (956) 722-8850.

Laredo City Cemetery
To order memorial trees or send flowers to the family in memory of Robert Cremo, please visit our flower store.