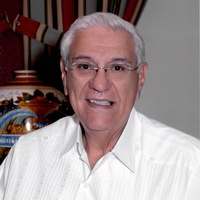 Mr. Palacios grew up exploring and enjoying the deep canyon of Chacon Creek with his lifelong friends Tom Sanchez, Jim Battaglia, Diana Sanchez and Tati Sanchez, and Charlie Leyendecker. He attended Ursuline Academy and St. Joseph's Academy, graduating in 1961. He attended the University of Texas at Austin and graduated with a Bachelor of Business Administration in 1966 from Texas A & M Kingsville. He later attended law school at St. Mary's University in San Antonio, and became a licensed attorney in Texas in 1971. He was board certified in Oil and Gas Law, by the State Bar of Texas Board of Legal Specialization.

Mr. Palacios eventually became an arbitrator- mediator, mediating over 1,000 cases throughout his career. He served as General Counsel for the Benavides Family Mineral Trust, from its infancy until this year.

Ricardo was born into a landed family, "land poor" as he usually described it. This gave rise to a tremendous love of the land, the fauna and flora of south Texas. He spent all of his free time at the ranch, until in the early 1980s when he moved his family to a new house on ranch land near Encinal. Eventually he inherited land and property from his Tio Juan Salinas. His association with and love for his Tio Juan for many years led to his writing of Juan Salinas' biography, published by Texas A & M Press in 2007-Tio Cowboy-Juan Salinas, Rodeo Roper and Horseman. He also published a memoir, Green Street Kid (Archway Publishing, 2013), and a fictional novel, Chon (MCM Books, 2018). His last book, Judgement Reversed, has not yet been published. He was awarded the Webb County Heritage Foundation Jim Parish Award for Documentation and Publication of Local or Regional History, in 2007. He also wrote several magazine articles dealing with tie down calf roping and the adventures of his tios Juan and Tony Salinas. In the opening dedication in Tio Cowboy he thanked the Lord for letting him be "at least a little bit of a cowboy."

Mr. Palacios was predeceased by his parents Abraham and Mucia Palacios, his brother Abraham Palacios, Jr., his sister Angela Palacios Shipton, and his granddaughter Charlotte Ellis Palacios. He is survived by his children and grandchildren, Ricardo D. Palacios, Jr. of Encinal, TX; George Abraham, Heather and Benicio Palacios of Tulsa, OK; Antonio Ignacio, Joelle and Sebastian Palacios of Seattle, WA; daughter Virginia Elizabeth Palacios of Austin TX; the mother of his children, Catherine Marie Link; and his dedicated partner, Sarah Lynn Appling. He is also survived by a large number of cousins, nephews and nieces. A special recognition to the members of the Wednesday Lunch Bunch that he formed in the 1990's with friends Jim Battaglia, Guillermo Cavazos, Jerome Jordan, Abe Salinas, Arturo Volpe, Tom Sanchez, Arnulfo Zapata, Guillermo Alarcon, Guillermo Vela, Jesse E. Hines, Homero Martinez and David I. Martinez. An utmost gratitude to his career secretary, Alicia "Bibi" Johnson, and secretary of the BFMT, Patricia Perez.

In Lieu of flowers, the Palacios family kindly requests that you please make donations to: the United Way of Laredo or to the Boys and Girls Club of Laredo.