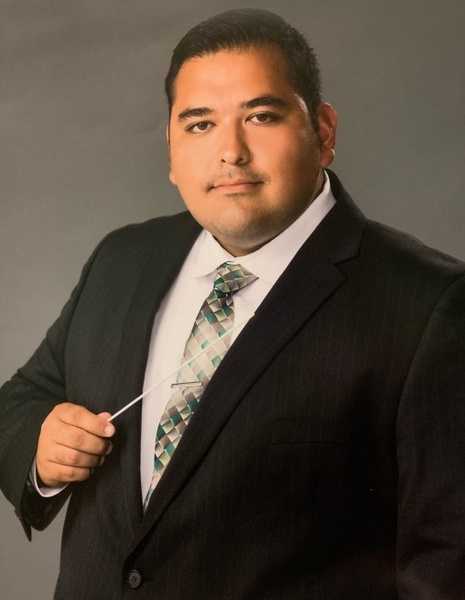 Ricky graduated at the top of his class from Martin High School in 2010 with perfect attendance throughout his educational career. He started his music career by being a percussion instructor at various schools around Laredo while simultaneously obtaining his Bachelor of Music from Texas A&M International University. Upon graduating from university in 2016, he became the Orchestra Director at Nixon High School for two years. He later became the percussion instructor at Vidal M. Trevino School of Communication and Fine Arts. Throughout his career, Ricky never lost his passion for music which helped mold the many young musicians that came through his path.

Ricky’s passion was to make music for others to enjoy whether it was through the Laredo Theater Guild International, the Laredo Philharmonic, or behind his cherry red drum set with the multitude of bands he was a part of. The amount of talent Ricky had was unmeasurable and you could hear it in his playing. The immense devotion and determination he gave to his music was something to admire.  He often used the phrase, “Something takes a part of me” when performing and seeing the look on his face after every set said it all.

Aside from music, Ricky devoted his spare time to the church. He was an altar server for over ten years as well as a eucharistic minister. Throughout fifteen years Ricky was a dedicated CCD teacher at Holy Redeemer. For over six years he was a member of The Knights of Columbus Council 14100.

Ricky was the pride and joy to his parents Jesus and Josefina Garza. He was the easygoing and mellow younger brother to Alma G. Ramos, Sandra & Jesus Garza. Ricky was described by his friends as the heart and soul of the group. He lightened up the room with his humor and his way of thinking. He was the type of person who was there during the highs and lows always offering help and encouragement. He was more than a friend; he was family.

To his students, he was the type of teacher who would help them find the song in their heart, the beat in their feet, and a passion for life. To his nieces and nephew, he will always be remembered as the older brother they never had, a tutor, a video game enthusiast, or the funny uncle when we needed a laugh.

Ricardo Alejandro Garza was born on a Thursday on May 21, 1992, and on Thursday, November 25, 2021, he drew his last breath. For ten thousand seven hundred and eighty days, Ricky honored us with his intelligence, his wisdom, his honesty, and his easygoing heart.

Although Ricky is already deeply missed, we know that he has been received in the embrace of his Heavenly Father where he will remain in peace and love everlasting.

He was preceded in death by his grandfathers, Antonio Garcia & Horacio Garza his aunts, Margarita Garcia, Elia Cardenas, & Patricia Miranda, and his sister, Alma G. Ramos.

The family will be receiving condolences on Friday, December 03, 2021 from 5 to 9 p.m. at Joe Jackson North Funeral Chapel & Cremation Services, 1410 Jacaman Rd.; where a Vigil for the Deceased and Rosary will commence at 7 p.m.

Funeral Services will be held on Saturday morning, December 04, 2021 departing at 9:30 a.m. from Joe Jackson North Funeral Chapels to Holy Redeemer Catholic Church for a Mass of Christian Burial at 10 a.m.

To order memorial trees or send flowers to the family in memory of Ricardo Garza, please visit our flower store.