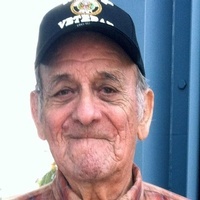 Mr. Ricardo Banda, Sr., was called by our Heavenly Father to eternal rest on Monday, February 11, 2019, at the age of 85. He passed away peacefully in his sleep with his family at his side.

He was preceded in death by his beloved wife, Gloria M. Banda and his youngest son, Roberto Banda, Sr.

Ricardo lived life by his own standards. His younger siblings looked up to him with respect and admiration. He was devoted to the Catholic Church. He worked hard and provided for his family. It was devastating for him when he lost his wife in 2002, yet he remained strong for his family. In 2012, he battled cancer and again his strength helped him persevere.

Ricardo was proud to have served his country during the Korean War, for which he was awarded medals of decoration.

In addition, he worked for Stokley’s Van Camp, a canning factory in Gibson City, Illinois, for 20 years as a factory supervisor. After which, he was a dedicated employee of U.I.SD. for 24 years. The last chapter of his life was spent enjoying his retirement years with his children, grandchildren and great-grandchildren. He will be greatly missed and always remembered dearly by his family and loved ones.

Funeral procession will depart the chapel at 10 a.m. on Saturday, February 16, 2019 to Holy Redeemer Catholic Church for a Mass of Christian Burial to be held at 10:30 a.m.

Rite of Committal and Interment will follow at the family plot of the Calvary Catholic Cemetery, where military honors will be rendered.