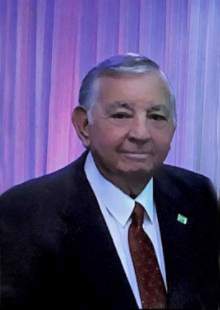 Reynaldo Hector Rodriguez Sr., a beloved husband, father, and grandfather, passed away peacefully on his birthday, March 6th, 2021 at the age of 85, surrounded by his family.

Reynaldo was born in Laredo, Texas to parents Manuel J. Rodriguez and Lamar Sanchez Rodriguez. Growing up alongside eight brothers and sisters, he enjoyed spending time with them as they worked with their dad at their ranch in North East Laredo, where his father taught them how to rope, ride horses, and raise cattle. He was also an active participant in the Webb Co. 4-H club, and raised a champion calf at L.I.F.E.

He attended grade school at St. Joseph’s Academy and graduated from Martin High School in 1954. Reynaldo demonstrated his unyielding work ethic early in his life. He worked after school at his father’s store, M. J. Rodriguez & Texaco/B.F. Goodrich Tire Company, downtown on the corner of Victoria St. and San Bernardo St. At the same time, he worked at the Pepsi-Cola Bottling Company franchise that his father purchased in 1935 during the Great Depression.

Upon graduation, he attended St. Mary’s University in San Antonio and completed his Bachelor of Arts in Business Administration in 1958. Alongside his brother Luis, they co-managed the Pepsi-Cola on 1119 Willow St., which was later moved to 4700 Sta. Maria Ave. It was one of the last original family-owned soda-pop bottling plants in the nation.

In 1961, he married the love of his life, Alicia Gonzalez, and together they had four boys. They both shared a love for traveling, where they visited exciting destinations all over the world.

Reynaldo was an admired businessman and entrepreneur. Throughout his career journey, he held many honorable distinctions. In 1975, the family ranch was a part of the pioneering Trophy Whitetail Deer Game Management Program in South Texas, which was later modeled in the United States Trophy W.T. Deer Management Program. In 1978, he was named Soil Conservationist of the Year by Webb County and the U.S. Department of Agriculture.

In 1994, Reynaldo received the Pepsi-Cola Bottler of the Year award by the President of Pepsi-Cola in the U.S., at the Metropolitan Museum of Art, inside the Egyptian Temple of Dendur exhibit in New York City, an accolade he was proud of as his family was the first and only Mexican-Americans to own a Pepsi franchise in the U.S.A.

Reynaldo also served on the Board of Directors at Commerce Bank for 29 years, beginning in 1991.

He was also a proud philanthropist, donating to organizations such as Community in Schools, March of Dimes, Boys & Girls Club of Laredo, Sacred Heart Children’s Home, and Boys Scouts of America.

Reynaldo was a longtime golfer, and had a group of buddies that would travel with him to play in various golf tournaments at the finest golf courses around the world, including Tucson, Pebble Beach, and Scotland. He also enjoyed hunting and traveled to Africa, New Zealand, and the Rocky Mountains with his friends and sons.

He always cherished spending quality time with his friends and family. Every Wednesday, he and his friends enjoyed many laughs over lunch at Toños Bar & Grill. Reynaldo spent the weekends with his family at their ranch cooking out, and he would watch his grandchildren swim in the pool on the ranch.

Reynaldo was the most loving, generous, and kind, family man. He was a devoted husband to his wife of 59 years, Alicia, and an incredible father to his children, Reynaldo H. (Cynthia) Rodriguez Jr., Ricardo Rodriguez, Raul A. (Patricia del Pilar) Rodriguez, and Gerardo J. Rodriguez (in loving memory ♱). He was always so proud and supportive of his grandchildren, Alany Lamar Rodriguez, Reynaldo H. Rodriguez III (“Hunter”), and Alysha Maria Rodriguez, who all greatly adored him.

The family would like to extend their thanks to the many thoughtful friends and family who have expressed their condolences.

In lieu of flowers, the family asks that you consider donating to the Sacred Heart Children’s Home of Laredo.

A memorial mass will be held at St. Patrick Catholic Church Friday, March 12 at 11:30 a.m. COVID 19 regulations will still be enforced and required to attend celebration.

A private inurnment will be held at the family plot following mass.

To order memorial trees or send flowers to the family in memory of Reynaldo Rodriguez, please visit our flower store.