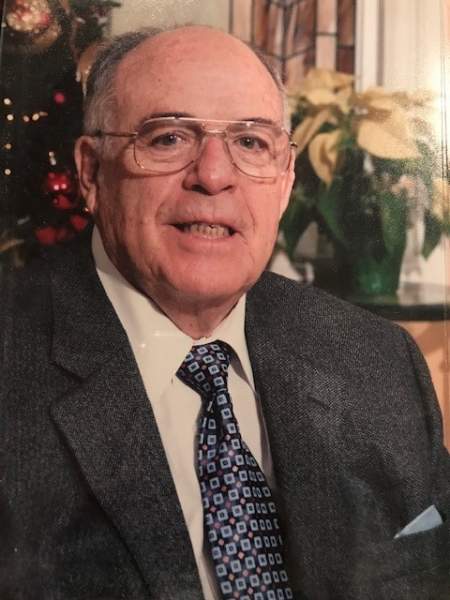 Ramon Salido, 91, passed away peacefully surrounded by his loving wife and daughters on January 20, 2021 in Laredo, Texas after a brief illness.

Ramon was born on December 24, 1929 in Mexico City to Laura Longoria and Ramon Salido Danache.  When he was a young boy his family moved to Nuevo Laredo, Tamaulipas where he spent most of his life.

He enjoyed reminiscing about his time as a boarder student at Peacock Military Academy in San Antonio. He kept in touch with his fellow classmates, attended the reunions and even drove by the school when in San Antonio.  He made everyone laugh when he told stories about how he used to escape and hop on the Greyhound bus to Nuevo Laredo only to be driven right back to school.  He graduated from St. Joseph’s Academy in 1949.  His high school senior annual describes him this way “He is everybody’s friend, humorist, full of wit, always capable of playing pranks on fellow students”.  His many friends have described him this very way.  Although school was not on the top of his list of favorite things Ramon had a long successful career as a businessman.  There was nothing he could not do or would not try.  He was relentless.  From owning a hamburger stand to ranching and farming, to the hotel and restaurant business and many other ventures including a maquiladora Ramon accepted all of the challenges with excitement and had pride in all he did.

Soon after high school he started farming at the family ranch where he grew cotton and grains.  In 1961 he joined the family business in the operations of the Motel El Rio where he worked alongside his father and brothers.  It was this same year that he married the love of his life Maria Eugenia Barrera. She supported him in all of his endeavors. Throughout their marriage they were inseparable. A good friend liked to say Maria Eugenia is like an American Express card, “you can’t leave home without it”.

Ramon was a proud Nuevo Laredoan. He was selected to the position of Administrator of the Department of Tourism.  His experience in the hotel and restaurant business made him the perfect candidate and he served his position for many years with much pride.  In 1979 he left the family business to pursue his dream of buying the famous Cadillac Bar with his cousin Chito Longoria.  This was his pride and joy to which he dedicated the rest of his working life.  Up until his final days his former employees would call to chat with him and to inquire about his health.

Ramon enjoyed the time he spent at the family ranch Los Apaches. He later renamed his portion El Tepeyac-the place where the Virgen de Guadalupe appeared.  This name had special meaning for him and came from his love and devotion to Her.  He was a religious man, although not very observant, but his faith carried him through all of his life.  He loved to learn about other religions and enjoyed long conversations with his son-in-law Jack.  He always said that what was most important was to have your faith.  He had a heart of gold and was always concerned for the welfare of the less fortunate.  He loved animals especially his dogs Cody and Pepe and donating to the Laredo Animal Shelter was very important to him.

At 90 years of age he once said to his family in a conversation that he had lived a full life and was content with his accomplishments. Ramon’s life was an adventure. A couple of wild adventures included him landing a Piper airplane on a dirt highway and another of him strapping himself to the wing of the airplane because there wasn’t enough room inside.  It’s no wonder that his favorite song was Frank Sinatra’s “I did it my way”.  Ramon was always full of life and a joy to be around. He was funny and had a tremendous sense of humor.  He could make anyone laugh in an instant because he always had a joke or story to tell.  Some stories were true and some were slightly exaggerated. He lit up any room with his infectious smile and his jolly ways.  He could talk about anything and everything.  He loved studying about history and geography and enjoyed reading.  He wrote beautiful letters in English and Spanish. He had a nice word to say about everyone that crossed his path.  He made friends easily, from all walks of life, young and old.  He treated everyone with the utmost respect.  He enjoyed hunting, golfing, playing cards with his buddies, watching and betting on football, traveling to Las Vegas and lately having lunch with his best friends at Tono’s every Wednesday.  Most importantly he treasured his time with his family.

Ramon was a devoted husband to his wife of almost 60 years, Maria Eugenia, a wonderful loving father to his three daughters, Tiki (Jack Avigael), Gaby (of blessed memory) and Sandra.  He adored his grandchildren Cristina and Elliot and was so proud of them.  He treasured his friendship with “Las Tias” Adriana Barrera, his sister-in-law, and Mary Kathryn Longoria.  He loved and respected his brothers Francisco “Pancho” and Eduardo “Wayo” (of blessed memory) and treasured the times he spent with his beloved sister Laura “Nena” (of blessed memory) who lived in Mexico City. He loved his many nieces and nephews as if they were his own children.  He also loved his many close cousins with whom he had a special bond.

Ramon will live on in the hearts of all who loved and admired him and he leaves a legacy of positive examples of how to live life to the fullest, to always be kind to others, and to be grateful for the many blessings that you have.

Because of the dangers of the current Covid crisis the family will be having a private service.  Family and friends will be invited to a celebration of his life at a later date in 2021.  The family wishes to express their gratitude to all of their family and friends who have reached out with numerous calls and messages.  Their love and support during these difficult days has been very comforting.

To order memorial trees or send flowers to the family in memory of Ramon Salido, please visit our flower store.