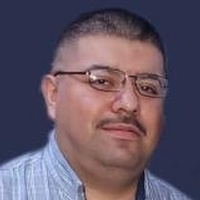 Rafael was born on January 25, 1981, to Rafael Angel Guerra, Sr. and Bertha Alicia Guerra in Laredo, Texas. He met his wife Anna Lisa Moreno in 1994. He loved to dance, listen to music, and cooking out with his family and friends. Rafael loved his wife Nani, all five of his children and grandchildren.

He was preceded in death by his beloved father Rafael Angel Guerra, Sr.

The family will be receiving condolences on Tuesday evening, April 23, 2019 from 5 to 9 p.m. at Joe Jackson Heights Funeral Chapels & Cremation Services, 719 Loring at Cortez; where a Vigil for the Deceased and Rosary will commence at 7 p.m.

Funeral Services will be held on Wednesday morning, April 24, 2019 departing at 9:30 a.m. from Joe Jackson Heights Funeral Chapels to San Luis Rey Catholic Church for a Mass of Christian Burial at 10:00 a.m.

A private inurnment will be held at a later date.

The family would like to extend their most heartfelt gratitude to: David “DAD” Moreno, Mr. and Mrs. Luis Villarreal, and Jose Martinez and family.