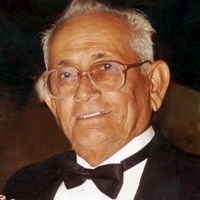 Pedro Murillo, known as Perico to his closest friends, was born on February 22, 1931 in Aguascalientes, Mexico to Antonio and Bruna Murillo. A few years later, his parents moved to Nuevo Laredo, Mexico where he, along with his four siblings, Isidro, Domingo, Francisca, and Jesus, were raised to be kind, generous, hardworking individuals.

His parents, Antonio and Bruna, had the good fortune of meeting and getting married in Detroit, Michigan when both their families had immigrated to the United States and settled in Detroit, Michigan. The sudden collapse of the American economy caused most immigrants to lose their livelihood forcing many, including his parents to return to Mexico. Bruna had recently given birth to her first son Isidro, and she was already expecting her second child, Pedro, at the time they made the long journey from Detroit to Aguascalientes.

In many ways, this was the kind of journey that exemplified Pedro’s long and prosperous life. “Life offers no guarantees”, our dad would often remind us, “you must prepare yourself with a good education”, he would insist. And our dad always practiced what he preached. He never allowed the fact that he had only received a 6th grade education to keep him from pursuing and exploring new opportunities in life. He enrolled in many technical training courses over the years, and he proudly displayed some of those diplomas and certificates on our walls at home.

Thanks to these courses and his experience in refrigeration, he continued to find better ways to provide for us by beginning his own business, Murillo Refrigeration. More than a business, it provided assistance to the elderly who could not pay the full amount of his services and helped many family and friends begin a career in air conditioning and heating. Eventually, he would retire from working for LISD’s Division of Operations. He provided his children with a good education and, best of all, a good example for his children and the community.

He was preceded in death by his parents, Antonio Murillo Cabrera and Bruna Garcia Davalos Murillo; and by his brother, Isidro Murillo.

The family will be receiving condolences on Saturday evening, September 29, 2018 from 4 to 9 p.m. at Joe Jackson North Funeral Chapels & Cremation Services, 1410 Jacaman Rd.; where a Vigil for the Deceased and Rosary will commence at 7 p.m.

Funeral Services will be held on Monday morning, October 01, 2018 departing at 8:30 a.m. from Joe Jackson North Funeral Chapel to Holy Family Catholic Church for a Mass of Christian Burial at 9 a.m.

A private Rite of Committal and Interment will be held at a later date.