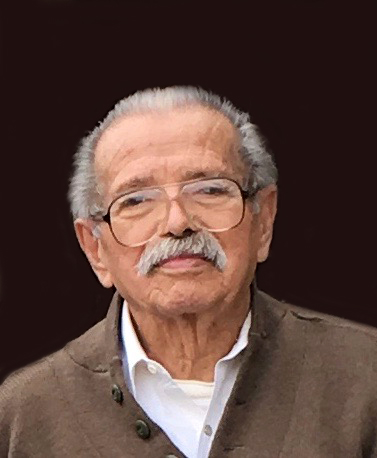 Rev. Pedro Escamilla, 87, was embraced by the Lord’s loving arms on Sunday, September 22, 2019, after a brief illness. He was a caring son, a loyal brother and brother-in-law, a loving husband, a devoted father, a committed grandfather, great grand-father, and great-great-grandfather, and a faithful servant of God. The son of Gen. Juan Escamilla and Catalina Morales de Escamilla, Pedro was born on January 30, 1932 in Cienega de Flores, Nuevo León. Rev. Escamilla leaves a legacy of love, faith, service, responsibility, commitment, and courage.

After high school, he attended UNAM (Universidad Nacional Autónoma de México) y UANL (Universidad Autónama de Nuevo León). Pedro was an avid reader throughout his life, and even as a child, enjoyed spending the afternoons reading while he sat in his grandfather’s (Dr. Diego Morales) medical office. He enjoyed watching movies with his wife, children, grandchildren, and great grandchildren.

Pedro married the love of his life, Margarita Celia Pérez, on November 26, 1950. Their relationship spanned 71 years and their marriage of almost 69 years was an example to many. They deeply loved, supported and cared for each other with a love not often seen. They had six children: Pedro Sergio, Sandra Margarita, Diana Teresita, Martha Catalina, Martin David and Claudia Anastacia.

Mr. Escamilla was a business owner. His business, P&M Mattress Service, spanned 150 miles in all directions and not only served the Laredo community but also many others. He was respected by his customers and made many friends. He took pride in the fact that he was a very active and independent person and responsible driver until the day before his illness. In his 71 years of driving in between cities and his hometown of Laredo, he maintained a perfect driving record. In 1978, he answered his call to ministry. He was affiliated with the Hispanic Church of God with headquarters in Cleveland, Tennessee and attended the Instituto Ministerial Hispano in San Antonio. He served as a minister for Iglesia de Dios and earned his Exhorter, Licensed and Ordained Minister Licenses and was the Pastor at Iglesia de Dios Sur Laredo for over 40 years. He impacted many lives through his hope-filled and love-based biblical messages. Rev. Escamilla lived a life of faith, serving Christ and serving others. Although he will be missed by all who knew him and those who love him, he is now rejoicing in the presence of the Lord. "I have fought the good fight, I have finished the race, I have kept the faith. Now there is in store for me a crown of righteousness, which the Lord, the righteous judge, will award to me on that day and not only to me, but also to all who have longed for his appearing." 2 Timothy 4:7-8

Words cannot express the void he has left in so many lives.

We wish to acknowledge with grateful appreciation and heartfelt gratitude the support and caring attitude that our dear dad received during his short illness from: Dr. Mateo Reyes and Dr. Rafael Deliz and their dedicated staff, Tony Martinez from Martinez Pharmacy, Amanda Montemayor, LSP @ Warm Springs Hospital in San Antonio, Doctor’s Hospital ICU staff, Reeves Rehabilitation Hospital staff in San Antonio, and his San Antonio attending physicians and their respective staff. Thank you for your daily encouragement for our dad and our family.

The family will be receiving condolences on Friday evening, September 27, 2019 from 5 to 9 p.m. at Joe Jackson Heights Funeral Chapels & Cremation Services, 719 Loring at Cortez; where a prayer service will be held at 7 p.m.

Funeral Services will be held on Saturday morning, September 28, 2019 at Joe Jackson Heights Funeral Chapels for a chapel service at 10:00 a.m.

Rite of Committal and Interment will follow at the Laredo City Cemetery.

To order memorial trees or send flowers to the family in memory of Pedro Escamilla, please visit our flower store.