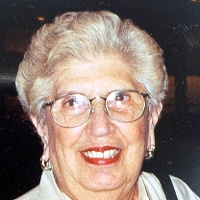 “She is clothed in strength and dignity and she laughs without fear of the future.” Proverbs 31:25

Oralia Rita Laurel went to be with our Lord on May 31, 2019 surrounded by her loving family. Oralia was born on May 22, 1926 in Laredo, Texas to Zaragoza and Maria Concepcion Laurel. She graduated from Ursuline Academy and went on to obtain her Bachelor of Science and Master of Science degrees from Texas Women’s University in Denton, Texas in the field of Home Economics. Oralia later attended Texas A&I University in Kingsville, Texas to become certified as a Vocational Homemaking Supervisor.

Commitment to her teaching profession earned Oralia the promotion to the position of Supervisor of the Homemaking Department of LISD. The students of Lamar Middle School honored her by dedicating the 1970 El Nopal Yearbook to her.

Home economics was the perfect field for Oralia. In addition to all the skills she imparted to her students, she often held night classes for family and friends on sewing, cake decorating, and making Easter sugar eggs. Through the years, she beaded beautiful creations of Christmas tree ornaments from Styrofoam balls. Every Christmas, she would present her nieces with a bagful of Christmas ball ornaments to choose from. Her nieces now decorate their Christmas trees and wreaths with Tia O handcrafted Christmas balls.

True to her teaching vocation, Oralia was a member of the Laredo Area of Retired Teachers Association. In 2001-2002 the Webb County Unit Retired Teachers Association (RTA) honored Oralia as a distinguished member, and dedicated that year’s yearbook to her. Through the years, Oralia served the Webb County Unit RTA as Secretary, Historian, and President.

Oralia was also active in her community and her church. She was a member of the Catholic Daughters of the Americas, Court Isabella the Catholic #683 and belonged to the St. Patrick Catholic Church Choir for many years.

Oralia enjoyed the camaraderie of many friends through active membership in Les Amies Club, two different Birthday Clubs, and a cherished Merienda Club and Bunco Club.

Traveling with family and friends was Oralia’s favorite past time. She travelled to The Panama Canal, Brazil, and Italy long before international travel was in vogue, and continued traveling through the years. Shopping sprees in San Antonio and the Marble Falls area with her sister and nieces were all time favorites.

Oralia’s legacy is family unity. For more than thirty years she hosted what she called The Sobrinas’ Christmas party at her home. All her nieces looked forward to that gathering when they would share family stories, gift exchanges, great food, and much laughter. True to Oralia’s legacy, her sobrinas have now adapted that tradition to the Primas e Hijas Christmas party. Her nephews periodically gather at her ranch to enjoy traditional Carne Asadas.

Oralia is preceded in death by her parents, Zaragoza and Maria Concepcion Martinez Laurel, and by her six siblings, Arabella L. Benavides (Armando), Alonzo Z. Laurel (Esther), Sergio L. Laurel (Licha), Oscar M. Laurel (Elsa), Angelina Sanchez (Trinidad “Trini”), and Angel R. Laurel and is survived by her sister-in-law Lidia Laurel. Although Oralia never married, all twenty eight nephews and nieces honor her as their second mother, as do her grand and great nephews and nieces.

The family wishes to extend heartfelt thanks to her doctor, Adonis Zúñiga-Goldwater, MD, Altus Hospice staff, providers, nurses, and private caregivers, San Juanita, Nora, and Manuelita. Their gentle care, compassion and support will never be forgotten.

All services will conclude at the church to proceed to a cremation a later date.

In lieu of flowers, a memorial contribution in her memory may be made to the Bethany House of Laredo or a charity of your choice.