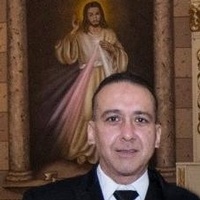 Ones was preceded in death by his mother, Sandra Farmer Medina; grandparents, Simon and Juanita Medina and Ones Carl and Angela Farmer; aunt, Gloria Jean Farmer; and son, Ignacio Rafael Medina.

Ones was a Proud Veteran who served in the United States Army and was stationed in Hawaii from November 1992- November 1996. He was a former Physical Education Teacher for U.I.S.D for several years. Ones loved to Bowl with his father in the San Martin de Porres League on Fridays. He also enjoyed cooking out and spending time with his friends. He will be dearly missed by his family and friends.

The family will receive condolences on Wednesday, August 08, 2018 from 5 to 9 p.m. at Joe Jackson Heights Funeral Chapels & Cremation Services, 719 Loring at Cortez; where a Rosary will be recited at 7 p.m.

Funeral procession will depart at 8 a.m. on Thursday, August 09, 2018 to San Luis Rey Catholic Church for a Mass of Christian Burial at 8:30 a.m.

Rite of Committal and Interment will follow at the Laredo City Cemetery-Veteran’s Section.

Arrangements are under the care and direction of the funeral service professionals at Joe Jackson Heights Funeral Chapels & Cremation Services, 719 Loring at Cortez, Laredo, Texas 78040; (956)722-0001.

Laredo City Cemetery
To order memorial trees or send flowers to the family in memory of Ones Medina, please visit our flower store.