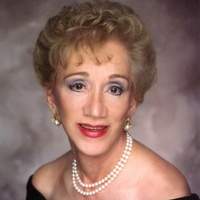 
Olga Rosenbaum Meyer was received into the arms of God’s mercy on Sunday, November 18, 2018.

Olga was born in México City on August 11, 1925 to the late Robert M. Rosenbaum and Olga Castillon Rosenbaum. She came to Laredo at a young age with her parents and her three sisters, Sophie, Gloria, and Sylvia.

She met and married the love of her life, Samuel Alexander Meyer on June 01, 1952. Together, they had three children, Frances-Carolyn, Miriam Alexis, and Alexander S.R. Meyer. Olga and Samuel were happily married for 52 wonderful years filled with family, friends, and extensive travels; visiting over 120 countries. They participated in civic endeavors including civic music, the Pan American Round Table, Art Association and Historical Society.

Olga was always a very active member of the Laredo community and was involved with various organizations including: The Women’s City Club where she served as President in 1954, The Society of Martha Washington where she also served as President and organized the Colonial Ladies in 1968. In 1965 she was chosen to portray the role of Martha Dandridge Washington with Mr. Robert Trautman who portrayed George Washington. In the fall of 1973 Olga received a certificate of service from the U.S. Air Force for the many hours of faithful service dedicated to the Foreign Student Training Program. Olga was also a devoted member of the Laredo Luncheon Club. In addition, she pursued her love of fashion with her involvement as Director of Public Relations at Frost Brothers of Laredo for eight years.

Among her many talents, Olga was an avid bridge player, loved gardening, cooking, and entertaining family and guests in her home. She will be greatly missed by all who knew and loved her.

She was preceded in death by her beloved husband, Samuel; her parents, Olga and Robert Rosenbaum; sisters, Sylvia and her husband Dr. S.K. Lawson and Sophie and her husband, John Snyder; brother-in-law, Oscar M. Rodriguez; and son-in-law, Gerardo G. Salinas.

The family would like to extend their most heartfelt gratitude to: Dr. Carlos Hornedo & Staff and Superior Nursing Care. There are no words to express our profound respect and love we have for her caregivers, Grace Castillo, Debbie Perez, and Brenda Hernandez. We also owe a great debt of thanks to her loyal housekeepers who have become part of our family, “Chata” Cardenas Treviño and “Lala” Alcantar.

Rite of Committal and Interment will follow at the family plot in the Jewish Rest Section of the Laredo City Cemetery.

In lieu of flowers, the family kindly requests that you consider making a donation to: Casa de Misericordia at 1000 Mier St.; Bethany House of Laredo at 817 Hidalgo St.; or to the Laredo Animal Protective Society at 2500 Gonzalez St.

Laredo City Cemetery
To order memorial trees or send flowers to the family in memory of Olga Meyer, please visit our flower store.