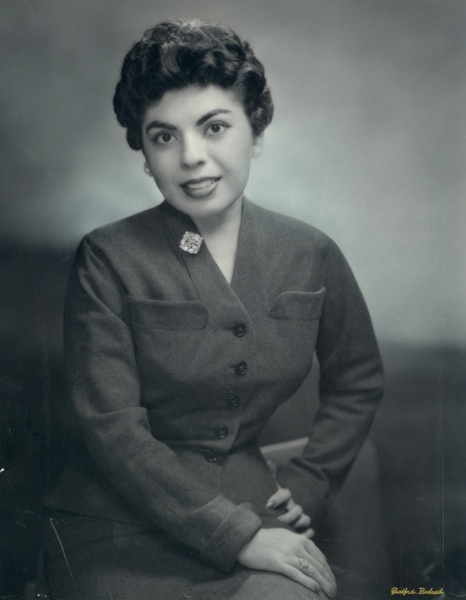 Ms. Olga Hachar was born in Laredo, September 1929, and has made her home here ever since. She married Captain. Louis Francis La Vaude in 1955. They had two children Yvonne La Vaude and Louis La Vaude who both live in Laredo, Texas. Olga La Vaude was raised by her grandparents Nicholas David and Feliza Hachar. She attended Incarnate Word High School and the University of the Incarnate Word where she majored in biology and a minored in chemistry and French. She later received a Master’s in Nursing and served on the Board of Trustees. She also received her Master’s from New York University in retailing.

Ms. La Vaude was a founding member of the Society of Martha Washington Association where she served as President and Mistress of Wardrobe and was very active with the Washington Birthday Association. She served as an active member of Webb County Heritage Foundation and as Lady Commander of Knights and Ladies of the Equestrian Order of the Holy Sepulcher of Jerusalem of the Diocese of Laredo. She was a member of The Laredo Animal Protective Society since 1980 and served as President; at Mercy Hospital Auxiliary. She also served as President and a volunteer for over 15 years; Board Member of the Laredo Art Association where she also featured her home for the Annual Holiday House Tour. She was an active member and Past Board Member of the Laredo Philharmonic where she also served on the Hospitality Committee in 1987, hosting many fabulous Fashion Shows for the family’s business, Hachar’s Dept. Store. The Hachar’s Department Store was one of the few businesses that had started an Employee Profit Sharing program in 1975 and successfully reached the one million dollar mark making it the largest of any organized by a firm that was completely local in ownership. Olga had ownership in the family business and was hands on in running her departments within the store and instrumental in creating the Fashion Teen Modeling Board. She actively served as a Eucharistic minister at St. John Newman and served as Vice-President of Blessed Sacrament Altar Society where she was voted to the Parish Council. Olga served as President of the Laredo Art League and remained an active member for many years. She also served as a member of the Laredo Little Theater and was a past President.

Ms. Olga La Vaude, in keeping with her family tradition of philanthropy recently she made a contribution to TAMIU for the Art and Stem research. Olga La Vaude loved being involved in her community and did not stop until recently when her illness prevented her from being further active. Her biggest pride and love are her children and grandchildren.

Olga had many interests, but one of her greatest joys was traveling around the world with family and friends. She had a very active lifestyle. She looked forward to her annual birthday parties, which were highlighted by the attendance of her many dear friends. We loved her so much and we will miss her zeal for life.

She was preceded in death by her uncle; David Nicolas Hachar, mother; Isaura Hachar, and aunt; Guadalupe Hachar Didieu.

The family will be receiving condolences on Tuesday evening, July 2, 2019 from 5 to 9 p.m. at Joe Jackson North Funeral Chapel & Cremation Services, 1410 Jacaman Rd.; where a Vigil for the Deceased and Rosary will commence at 7 p.m.

Funeral Services will be held on Wednesday morning, July 3, 2019 for a Mass of Christian Burial at Blessed Sacrament Catholic Church at 9:00 a.m. Everyone attending mass is kindly asked to meet at church; there will be no procession from funeral.

The family would like to extend their most heartfelt gratitude to: her caregivers who were devoted to her during the last years of her life.

In lieu of flowers, the family kindly requests that you consider making a donation in Olga’s name to: Laredo Animal Protective Society, Bethany House, or the charity of your choice.

To order memorial trees or send flowers to the family in memory of Olga Hachar La Vaude, please visit our flower store.