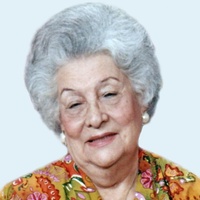 Our LOVING MOTHER, Olga Benavides Guerra, passed away peacefully on April 14, 2018, surrounded by her family.

She was a life-long resident of Laredo and a well-respected court reporter at the 111th District Court until her retirement. She ran the court efficiently for Judge E.D. Salinas and Emilio “Chito” Davila.

She will also be greatly missed by her loving “niece” Raquel “Rocky” Dias (Peter) Sakai, her brother-in-law, J.V. (Nancy) Laurel, her sister-in-law, Juanita S. Benavides and numerous nieces and nephews.

The family would like to thank Dr. Gilberto Garza-Lozano, ALTUS Hospice, nurses: Marqi, Erica, Melissa and Sammy, as well as Tere and Blanca who saw to our mother’s comfort and care.

A Private Interment will be held at a later date.

You may extend your condolences online at: www.joejacksonfuneralchapels.com

Arrangements are under the care and direction of the funeral service professionals at Joe Jackson North Funeral and Cremation Services, 1410 Jacaman Rd., Laredo, TX 78041, 956.722.8850