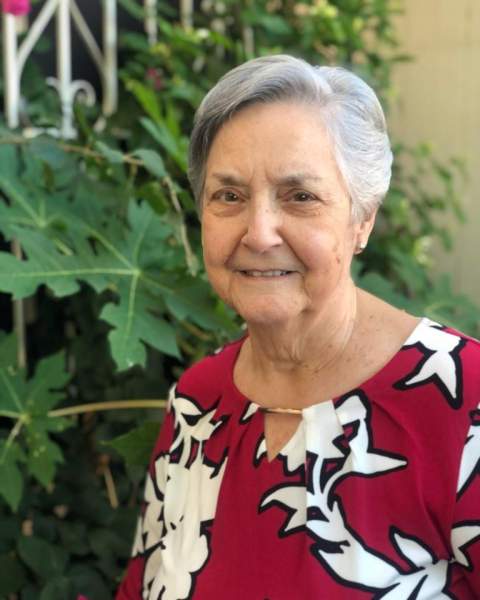 On September 9, 2022, Olga P. Flores passed away peacefully in her home and is now resting joyfully in the arms of Jesus.  She was a mother to three, but called “Mom” by many.  Everyone who called her mom, momma, mami, had their own story to tell, their own special relationship with her.

Olga was born in Laredo, Texas, where she spent the majority of her life.  She married Fernando Flores and moved to Nuevo Laredo, Tamaulipas Mexico, where she would go on to raise her three children, before the family moved to Laredo, Texas in 1975.  Olga had a long banking career with the Laredo National Bank, spanning 39 years, retiring in 2007.

In 1982 she lost the love of her life to cancer, leaving her to raise their three children.  Though it was no easy task, she proved to be one of God’s greatest warriors, never giving up and always persevering in faith. Family gatherings were her favorite, in them she loved the gift of laughter. Her sense of humor was unmatched and definitely passed on to her children. Her faith carried her through so much in this life, always allowing God to mold her and help her grow.  Olga loved sharing her faith with anyone who would listen and even those that wouldn’t. She was an active parish member at San Martin de Porres Catholic Church, worked on teams for Cursillos de Cristiandad and ACTS, enjoyed activities in various church groups. Olga enjoyed spending time with friends, who became family to her. Some of her most treasured experiences were her travels with church groups, to biblical places in Italy, Turkey and Greece. A question was posed to her, asking what life meant to her and she answered….. “I have no regrets, I’ve had a good life, ups and downs, but never dull. If you lose your laughter, you lose me; and I plan to be with you always. Keep me in your hearts and I’ll be around.”

Left to cherish her memory are her children, Alma Ramirez, Sandra Salinas and Fernando (Linda) Flores. She will be missed by her grandchildren, Noey Ramirez, Alfredo Ramirez, Alisandra Salinas, Shelby Salinas, Fernando A. Flores, Benjamin Flores; great-grandchildren, Manny Morales, Destini Gonzalez, Triniti Gonzalez and Kiara Webb. She will also be missed by her extended family and friends, who never walked away from her, without being loved.

The family will be receiving condolences on Friday evening, September 16, 2022 from 5:00 p.m. to 9:00 p.m. at Joe Jackson Heights Funeral Chapel & Cremation Services, 719 Loring at Cortez.; where a Vigil for the Deceased and Rosary will commence at 7:00 p.m.

Funeral Services will be held on Saturday morning, September 17, 2022, departing at 8:30 a.m. from Joe Jackson Heights Funeral Chapels to San Martin de Porres Catholic Church for a Mass of Christian Burial at 9:00 a.m.

Honorary Pallbearers will be: Fernando A. Flores, Noey Ramirez and Armando Ramirez.

The family would like to extend their most heartfelt gratitude to all family and friends that have touched her life.

To order memorial trees or send flowers to the family in memory of Olga P. Flores, please visit our flower store.