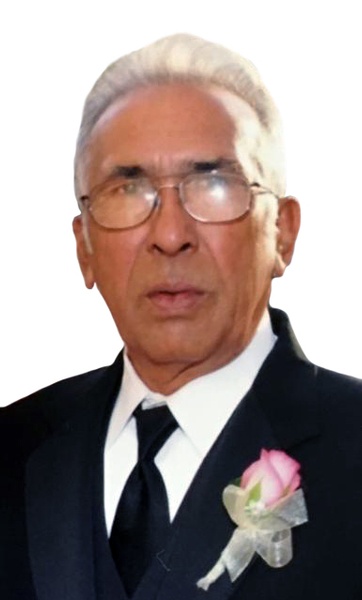 Miguel M. Amaro passed away in his home on May 6, 2020 in Laredo, Texas, due to complications following a five-year battle with lung cancer. He was 75 years old.

Mr. Amaro was born on December 16, 1944 in San Luis Potosi, Mexico to his parents Pioquinto Amaro Maldonado+ and Maria del Carmen Maldonado de Amaro+. He immigrated to Laredo, Texas after marrying the love of his life Maria Elizabeth (Varela) Amaro and both became naturalized U.S. citizens in 1985. Together they built a loving home with their three children. He served his community as a successful business owner of A&A Welding Ironworks & Ornamental Welding, providing structural foundations and promoting ironworks security throughout Laredo and South Texas.

He is preceded in death by his parents, and siblings, Caritina, Jose, Simon, and Floriberto.

Mr. Amaro was a patient and supportive father, grandfather, great-grandfather and community member. His strong work ethic was unparalleled by anyone. He had a passion for collecting coins, watching soccer, and making people smile. He was presented a Paul Harris Fellow from the Laredo Daybreak Rotary Club in recognition of his service to the community.

The family will be receiving condolences on Monday evening, May 11, 2020 from 5 to 9 p.m. at Joe Jackson Heights Funeral Chapel & Cremation Services, 719 Loring Ave., where a Vigil for the Deceased and Rosary will commence at 7 p.m.  Cremation services will be held at a later date in a private ceremony.

**Visitation will be according to the new orders issued by the governor of the State of Texas and limited to a 25% capacity at the funeral chapel. Everyone must wear a mask in order to attend services. **

The family would like to extend their most heartfelt gratitude to: Dr. Mateo Reyes & Staff for his continued healthcare throughout his illness.  START Center for Cancer Care in San Antonio, Dr. Drengler, Dr. Patnik, Dr.Mira and all their staff.

In lieu of flowers, the family kindly requests that you consider making a donation to: South Texas Food Bank, 2120 Jefferson St., Laredo, TX 78040; 956-726-3120; or online at www.southtexasfoodbank.org

To order memorial trees or send flowers to the family in memory of Miguel Amaro, please visit our flower store.