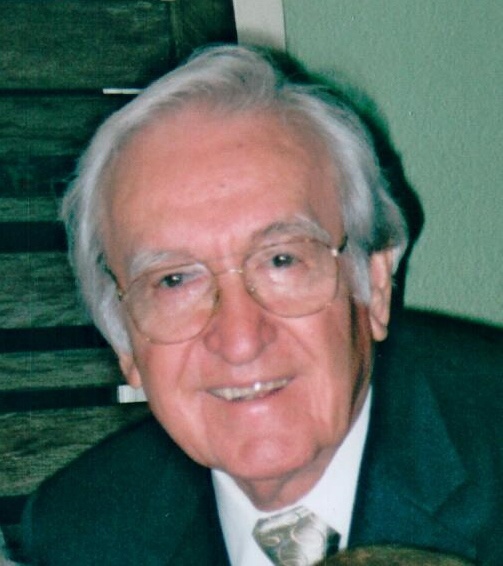 Mauricio A. Garcia, Wicho as he was affectionately known, native Laredoan, avid golfer, respected businessman, and an entertainment impresario known throughout Texas and Mexico, passed peacefully at home surrounded by loving family.

When he was a young boy, Wicho worked as a ticket taker at the Royale Theatre. Even to the end of his life, he remembered running from the Royale to the Tivoli Theatre with a needed cartoon reel when the bombing of Pearl Harbor was announced on December 7, 1941. In 1944, Wicho began work for the Texas Mining & Smelting Company, later known as the National Lead Co., where he retired as Comptroller in 1981. In 1982, he opened Roli’s Music Hall where he pioneered the popular “Sunday Dances,” and eventually held wedding receptions, quinceañeras, Christmas parties, and other important events for businesses and families over multiple generations of guests.

Ultimately, it was Wicho’s innovative work as an entertainment promoter and impresario that brought him into contact with a variety of world renowned music performers such as Selena, Juan Gabriel, Luis Miguel, Rocio Durcal, Mazz, La Mafia, and others from the United States and Mexico. It was his astute eye for music talent and passion for bringing these and others to perform in Laredo, some at the beginning of their careers and others in their prime, that eventually made Wicho himself a “Tejano Entertainment Legend” in his own right.

He is also survived and will be deeply missed by his loving companion of several decades of his later years, Gloria A. Herrera, her children, and theirs, who welcomed their beloved “Mr. G” into their families (Arciniega, Hart, Doshier, Guajardo) and their hearts, as he did them.

Special thanks to Dr. Eloy Zamarron and Dr. Ralph Nimchan, as well as their office staff for their able care through the years. Also, gratitude toward his dutiful caregivers Nallely (he just called her “Friend”) and Leyde for their care and service to the family over the past weeks. As he did in life, we also honor his many dear friends, most made in his earliest years and also now gone, for their blessings throughout his life.

Laredo has lost a true gentleman, whose kindness, humility, and grace, were as familiar to all who encountered him as his immaculate and refined appearance, the twinkle in his eyes, and his bright sincere smile. “Mr. Smile,” as some also called him, may have left us but he will not be forgotten.

The family will be receiving condolences on Sunday evening, February 23, 2020 from 2 to 6 p.m. at Joe Jackson North Funeral Chapels & Cremation Services, 1410 Jacaman Rd.; where a Vigil for the Deceased and Rosary will commence at 4 p.m.

Funeral Services will be held on Monday morning, February 24, 2020 departing at 9:30 a.m. from Joe Jackson North Funeral Chapels to St. Patrick Catholic Church for a Mass of Christian Burial at 10 a.m.

To order memorial trees or send flowers to the family in memory of Mauricio Garcia, please visit our flower store.