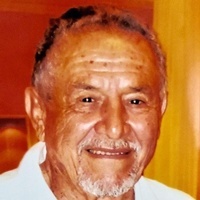 Martin was born on May 22, 1926, to Marcos Cuellar and Francisca Siller Cuellar in Guerrero Viejo, Tamaulipas, Mexico. He met Odilia Perez in a plaza in Guerrero Viejo and married soon after.

After immigrating to the United States, Martin did migrant work in Utah, Idaho, and Colorado. After starting a family, Martin decided to move to Laredo where he did construction, carpentry, and gardening work. After being offered a job running a ranch by Drs. Leo and Joaquin Cigarroa, Martin and Odilia moved their family of eight to the Texas Hill Country. Having been raised in a ranch in Mexico where he started working at the age of seven, Martin loved ranching and the outdoors. He was an excellent marksman and hunter. Martin and Odilia returned to Laredo where Martin continued to do labor work to support his family. Martin immigrated to the United States because of the opportunities it provided. Martin became a naturalized citizen and he loved his country.

Martin loved his wife, Odilia, and all eight of his children and grandchildren. Though Martin had barely a year of school under his belt and knew a few words of English, Martin was an excellent role model for his children. He taught his children the dignity of an honest living, the importance of a hard work ethic, and the significance of being humble and treating people with respect and integrity. He taught his children to be courageous and to always do the right thing in life.

He was preceded in death by: his beloved wife, Odilia Perez Cuellar; and sister, Josefina Walker

The family will be receiving condolences on Monday evening, April 15, 2019 from 4 to 9 p.m. at Joe Jackson North Funeral Chapels & Cremation Services, 1410 Jacaman Rd.; where a Vigil for the Deceased and Rosary will commence at 7 p.m.

Funeral services will be held on Tuesday morning, April 16, 2019. Mass of Christian Burial will be celebrated at 10 a.m. at St. Patrick Catholic Church, 555 E. Del Mar Blvd.; the Most Rev. Bishop James A. Tamayo will be officiating.

Honorary Pallbearers will be: Carlos Cuellar and Manuel Cuellar.

The family would like to extend their sincere gratitude to: Dr. Arturo Garza-Gongora, Dr. Ricardo G. Cigarroa, South Texas Families Home Health, for their care, attentions and friendship throughout dad’s life.

In lieu of flowers, the family kindly requests that you consider making a memorial contribution in his honor to the Laredo Animal Protective Society, 2500 Gonzalez St., Laredo, TX 78040.