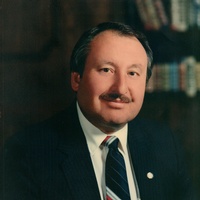 On Monday, May 21, 2018, Our Heavenly Father called his faithful, humble servant, Mario Octavio De La Peña Sr. also known as "Sonny" to friends and colleagues into the Kingdom of Heaven where anyone who believes in him is promised everlasting life and peace for eternity. Although our hearts are grieving, our Lord continues to blanket us with ALL His Love, Peace, Grace and Mercy which gives us the strength to carry on with his legacy. Mario was born on July 7, 1940 in Laredo, Texas. He attended St. Augustine for grade school, St. Joseph's Academy, Martin High School, and he graduated from Holding Institute in May of 1961. Mario was blessed with a distinguished gift of playing basketball and baseball where he was feared as a sharp shooter in all of northern Mexico and the southern USA simply as number 10. In addition, he also left his legacy as an outstanding pitcher with a great fastball and deadly curveball. It was at Holding Institute where Mario met the Love of his life, Ruth Maria A. De La Peña. He pursued a business career in San Antonio, Texas where he attended and graduated from Durham Business College in 1964. He began a career as an insurance agent for 11 years with American National Insurance company. He also worked for Western and Southern and Southern Life Insurance Companies. He received many distinguished awards and recognitions throughout his business endeavors. He pursued higher education in the insurance business by the level of LUTC Fellow, which is the highest level of certification. It was through this education that United Insurance Company immediately recognized him as Senior District Manager. His outstanding leadership skills allowed him to build leading insurance companies in the nation.

Mario had three very important passions in life: God, family and work. He always gave praise and honor to God at every moment possible. He acknowledged God in all his accomplishments. He always gave thanks to God for his work and his clients, for it was through this blessing that he would say, "I am able to feed, clothe, house and educate my family. It was through this relationship with God that he was able to always be a great husband, father, grandfather and great grandfather. He instilled in us discipline, determination, perseverance, integrity, respect, compassion, honesty, modesty, humility, love and responsibility.

The family will gather on Thursday, May 24, 2018 from 5 to 9 p.m. at Joe Jackson Heights Funeral Chapels & Cremation Services, 719 Loring at Cortez; where a Vigil for the Deceased and Rosary will be recited at 7 p.m.

Funeral Services will be held on Friday, May 25, 2018 departing at 9:40 a.m. from Joe Jackson Heights Funeral Chapels to Christ the King Catholic Church where a Holy Mass will be celebrated at 10 a.m.

Cremation will be held at a later date.

Arrangements have been entrusted to the care and direction of the funeral service professionals at Joe Jackson Heights Funeral Chapel & Cremation Services, 719 Loring at Cortez, Laredo, Texas 78040; (956)722-0001.

Christ the King Catholic Church
To order memorial trees or send flowers to the family in memory of Mario Peña, Sr., please visit our flower store.