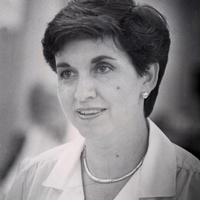 Mrs. Lillian S. Dickinson was born on August 18, 1940 to Abelardo and Lillian Hein Salinas. They both preceded her in death.

She was a 1958 graduate from Ursuline Academy; a 1962 graduate of The University of the Incarnate Word, then known as Incarnate Word College. She obtained her Masters’ Degree from what is now known as the A&M University at Kingsville.

She was married to William Dickinson for almost 54 years, and together they had three sons, Richard William (Diana), Michael Edward (Jacque), and Robert John. They had two grandchildren, Zachry Taylor and Bryce Elizabeth. They also had two step-granddaughters Jessica Moore and Ileana San Miguel and one step great granddaughter Megen. She is further survived by her brothers, Abelardo Salinas, Ruben “Benny” Salinas, Arnold Salinas, and Oscar “Dickie” Salinas.

She served as a member of the Child Welfare Board for 16 years; the last 8 she served as Treasurer. She was also a charter Board Member for 6 years of AHEC (AREA Health Education Center); she served as Charter Member of the Laredo Commission for Women for 8 years. During those 8 years she served one term as Vice-president, and 2 terms as President.

She lived her life by the philosophy she learned as a child, “There but for the grace of God go I”. She was a member of the Blessed Sacrament Altar Society and a parishioner of the same church.

She demonstrated her love for her down-trodden fellow man by being a Social Worker when there were no government programs that made services available on eligibility; and depended on generosity of friends and church groups. She often relied on herself for resource as she did not want to tire her friends.

Funeral services will be held Monday, April 16, 2018, departing the funeral home at 10:30 a.m. to Blessed Sacrament Catholic Church for a Mass of Christian Burial at 11:00 a.m.

Rite of Committal and Interment will follow at the Laredo City Cemetery.

You may express your condolences online at: www.joejacksonfuneralchapels.com.

Arrangements are under the care and direction of the funeral service professionals at Joe Jackson Heights Funeral Chapels, 719 Loring at Cortez, Laredo, Texas 78040; (956)722-0001.

Laredo City Cemetery
To order memorial trees or send flowers to the family in memory of Lillian Dickinson, please visit our flower store.