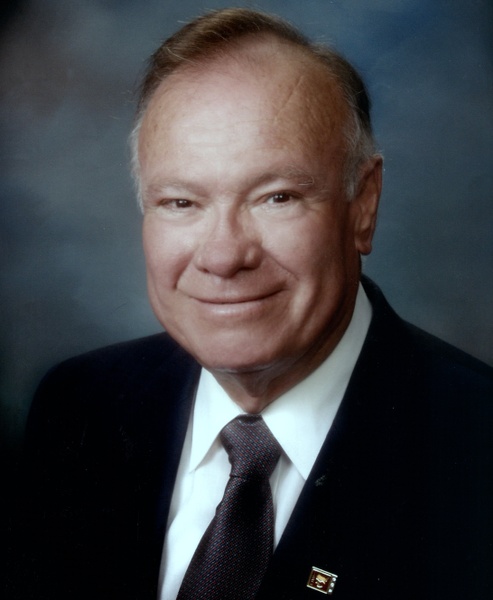 Leonardo Ricardo Salinas, known affectionately to his family and friends as “Lenny” was born in Candela, Coahuila, Mexico on November 7, 1933 to his parents Antonio, Sr. and Rosa Ayala de Salinas.  He is the oldest of eight children.  Although born into poverty during the Depression years, his parents instilled in him a strong work-ethic. In 1943 when Lenny was 10 years old, his family left Mexico in hopes of a better life in the United States, where Lenny attended school, graduated from Martin High School in 1953 and later took accounting and banking courses through correspondence, equivalent to an associates degree. He became a man of honesty, loyalty, integrity, served others with humility and was known for his infectious smile. Lenny proudly served the U.S. Army from 1955 to 1957 attaining the rank of Sergeant and receiving the Outstanding Service Award from the Army.  He continued serving in the Army Reserve for a few more years.

Lenny met his lifelong companion and wife of 66 years, Juanita Moreno in Laredo, to whom he credits his life’s legacy.  Lenny and Juanita married on February 29, 1956 and had six children Ricardo Luis, Sandra Elsa, Gerardo David, Melissa Laura, Sylvia Ann, and Leonardo Ricardo, Jr instilling in them to honor Jesus, our Lord and Savior and that to love God is to love and serve others. He loved his children unconditionally and selflessly supported them in significant life decisions.

Leonardo had an unquestionable faith in our Lord Jesus Christ, in the Catholic Church, and strong family values. He was a member of St. Patrick’s Catholic Church and practiced good stewardship throughout his life by volunteering his time and energy in the Laredo community through organizations, serving as past president of LULAC Council Number 12, the Laredo Evening Lion’s Club, and as former director of the Salvation Army.  He also entered the Equestrian Order of the Holy Sepulcher of Jerusalem in 1986 where he obtained the highest promotion in rank of Knight Grand Cross.  He was a generous man who gave to God what belonged to him as an avid supporter of various charities, such as; Mercy Ministries of Laredo, Mays Cancer Center, The Congregation of St. John and the Catholic Diocese of Laredo. In 2013 Leonardo was honored by Catholic Social Services Diocese of Laredo.

Leonardo began his banking career at Union National Bank as a filing clerk, bookkeeper and teller.  In 1966 it was Lenny who helped unlock the doors of then start-up Bank of Commerce of Laredo which is now known as International Bank of Commerce (IBC).  Having risen through the ranks quickly, he was promoted from assistant cashier in charge of bank operations to Executive Vice President and appointed to its Board of Directors. Some called him ‘Mr. International’ for the client relationships he developed throughout Mexico. He eventually attained the rank of Senior Executive Vice President and was recognized by the Texas Banker’s Association and National Banker’s Association with Distinguished Service Awards.  Leonardo retired in 2000 after 35 years of banking service at IBC and continued as a bank director for another 15 years, serving IBC for a total of 50 years. He developed a deep affection for his colleagues and staff at the bank and considered them family always encouraging them to “go to church.”  Because of his tenure and dedication to IBC, Leonardo was honored with a suite on the third floor of the main IBC Bank in Laredo, appropriately named the ‘Salinas Suite’.  After his retirement, Leonardo was so proud of IBC, he continuously promoted the bank.

Leonardo had an entrepreneurial spirit and along with Juanita they took investment risks by building and purchasing apartment buildings and other real estate property throughout Laredo.  Leonardo was also the owner of Laredo Boat & Supply in the 1980’s which was near Lake Casa Blanca International State Park.

Leonardo was a very loving father who always thanked God for all the blessings that he received throughout his life.  On behalf of the entire family, we love you so very much and thank you for providing the unconditional love, support and the best possible life a family could ask for.

He was preceded in death by his parents, Antonio and Rosa Salinas Sr., sister Bertha Rangel, and brothers Fernando and Antonio R. Salinas.

The family will be receiving condolences on Sunday evening, October 16, 2022 from 6 to 9 p.m. at Joe Jackson North Funeral Chapels & Cremation Services, 1410 Jacaman Rd.; where a Vigil for the Deceased and Rosary will commence at 7 p.m.

Funeral Services will be conducted on Monday morning, October 17, 2022 departing at 9:45 a.m. from Joe Jackson North Funeral Chapels to St. Patrick Catholic Church for a Mass of Christian Burial at 10:00 a.m.

The family would like to extend their most heartfelt gratitude to: Father Pedro Mercado Jr., caregivers; Lilibeth Martinez and Cristina Figueroa, United Med Care Ambulance, Dr. Adonis Zuniga-Goldwater and Dr. Carlos A. Espinosa.

In lieu of flowers, the family kindly requests that you consider making a donation to: Mercy Ministries of Laredo or Mays Cancer Center.

To order memorial trees or send flowers to the family in memory of Leonardo R. Salinas, please visit our flower store.