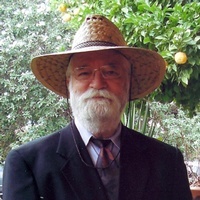 Lem Londos Railsback was born in Menard, Menard County, Texas, on September 5, 1936, to Esther Edna Gage Railsback and Lem (NMI) Railsback. His mother Esther had worked as a ranch hand on the Menzies’ Sheep Ranch in Menard after high school, and his father Lem was a cook at the Bevans Hotel in Menard.

Dr. Railsback attended school in Brady, Texas, where he graduated in 1955. He received his Bachelor’s Degree and later a Master’s Degree from what is now Sul Ross State University.

He taught in public schools until the early 60’s, then taught at the Job Corps Center in San Marcos. He also attended college in San Marcos receiving another Master’s Degree. After the Job Corps, he worked for the Texas Education Foundation. Along the way, while still in San Marcos, he commuted to Austin to study towards a Doctorate. He received a Ph.D. degree in the 70’s and came to Laredo to be a professor at LSU, which eventually became what is now TAMIU, where he taught for 35 years. Before retiring he continued taking courses using the Great Courses Series online.

He is preceded in death by his parents and grandparents.

He is survived by his sister Mary Esther Armistead of Laredo, Texas; one nephew William Les Armistead of Orlando, Florida; one cousin he considered as a little sister, Georgia Buckingham of Lovington, New Mexico. He is also survived by numerous cousins, and other loving relatives and friends.

The family will be receiving condolences on Friday evening, March 29, 2019, from 5 to 9 p.m. at Joe Jackson Heights Funeral Chapels & Cremation Services, 719 Loring at Cortez.

Interment will follow at the Laredo City Cemetery, where he will be provided with military honors by the U.S. Navy.

Laredo City Cemetery
To order memorial trees or send flowers to the family in memory of Lem Railsback, please visit our flower store.