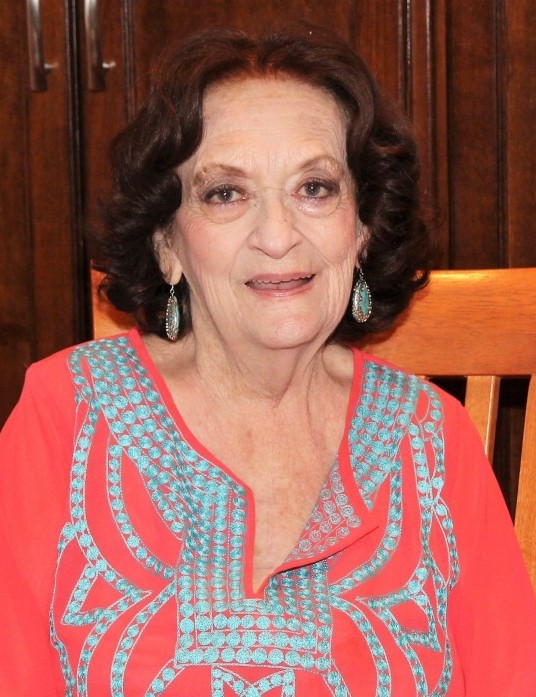 Josette Kahn Palacios left this earth to join her Heavenly Father at dawn on July 27.

She returned to Laredo in 1958 where she met her husband Joe. They married in 1959 and were married until his death in 2001. They were opposites in ways that balanced them both.

Josette loved her children and grandchildren more than life itself. She considered them all beautiful, brilliant and perfect, each one in his own way.  Josette was known for entertaining people … through music, in the kitchen, and with her quirky sense of humor.

While she was a concert pianist, she was best known as the “Vikki Carr” of Laredo, and while she crooned romantic Mexican ballads, one of her best friends offered dramatic and hilarious translations. A teacher at heart, Josette began her education career at M.S. Ryan Elementary as a second-grade teacher moving up to teach 6th grade, and finally serving as an administrator for Special Education. She also tutored, taught French and guitar to many of Laredo’s most famous musicians, who learned “Lemon Tree” and “Tom Dooley” at her home. She was also very frank about talent, or the lack thereof, telling some of her friends, “This one will never learn.”

She loved to cook for her friends and family. Mole, oxtail soup, and chiles en nogada were some favorites. Her “funeral dish,” a French onion soup chicken and rice, was often requested. Mostly, she was known for the Kahn family oyster dressing which was coveted by many each time Thanksgiving and Christmas rolled around.

Always quick witted, she was also quirky, like when she genuflected entering the courtroom or fell to her to knees in search of her nephew’s finger when he smashed it in the car door. When her son, Joe, told her to stop calling because she was going to give him a heart attack, she responded, “Been there. Done that.” Once in the early morning she ran off a friend who was leaving a gift in the mailbox. Her humor was enhanced as her hearing began to fade. There’s a Laurel and Hardy-like skit about “gas” that some might find offensive. She would leave notes on her door when she knew she was having guests, “Come in. I won’t hear the doorbell.”

She was preceded in death by her parents, Frances and Robert A. Kahn; husband Joe; her sisters Helen Kahn Gustainis and Luisa Kahn Gutierrez. She is survived by her children: Rosanne Palacios (Rick Pauza), JoEmma Sherfey (Ed); Christina Valls, and Joe Palacios, Jr. (Cristi); her grandchildren Kimberly Maldonado (AJ); Edward Sherfey, III, Cristina V. Palacios, Joe Palacios, III, Anali Palacios, and Evan Valls, and two great-grandchildren, Trey and Matthew Maldonado. She is also survived by her sister Maruca Kahn Ferguson and her brother Robert A. Kahn, Jr., and numerous nieces and nephews who she adored.

In lieu of flowers you may honor Josette by making a heartfelt memorial donation to: The Josette and Joe Palacios Endowment fund at TAMIU ( https://secure.touchnet.com/C20208_ustores/web/product_detail.jsp?PRODUCTID=1098&SINGLESTORE=true ) (giving.tamiu.edu ) or Mercy Ministries of Laredo.

We wish to thank all our friends and acquaintances that have express their condolences on the loss of our mother. In keeping our moral and ethical observations during this pandemic, all funeral services will be held privately by our family. An online memorial obituary may be found on the funeral home’s website. Please stay safe and continue praying for the eternal repose of her soul and our grieving process.

You may extend our condolences to the family online at: www.joejacksonfuneralchapels.com

To order memorial trees or send flowers to the family in memory of Josette Palacios, please visit our flower store.