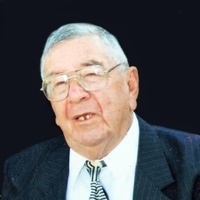 
Jose Elpidio Arredondo, 95, was a hard-working, God-fearing, strong, and humble man. He loved everything about life, taking pleasure in simple things like watering his plants, spending time in the perpetual Adoration Chapel at St. Patrick’s Catholic Church, where he was a parishioner for over fifty years, and watching his favorite sports teams, the Dallas Cowboys and the San Antonio Spurs. He enjoyed his daily telephone conversations and weekly breakfast meetings at Danny’s with his beloved sons, who were his pride and joy. He loved a good home-made meal and never said no to dessert!

On Wednesday, July 18th, just ten days after celebrating his 95th birthday, the good Lord called him to his eternal home. He was surrounded by his loving family.

Born on July 8, 1923, Grandpa Joe, as he was lovingly called, grew up during the Great Depression. He was only three years old when his father, who owned and operated Arredondo Dairy, died. He followed in his father’s footsteps as soon as he was old enough to work and would walk the streets of Laredo selling cheese and milk. He and his siblings took on the responsibility of helping their widowed mother support the family. He often spoke of his mother and remembered her ability to make ends meet with very little money during his childhood. Although he stopped attending school in the fifth grade because of his family’s needs, he believed strongly in the value of an education. He and Petra encouraged their children to excel in school and attend college. Grandpa Joe had a strong work ethic and was a proud American, values that he also instilled in his family.

Grandpa Joe enlisted in the United States Marine Corp. in 1944. He was assigned to the 7th Marines, First Marine Division, and Platoon 613. He was a proud veteran of World War II, having participated in the Battle of Okinawa in April 1945. During his time in Okinawa he was injured by shrapnel from a grenade and received the Purple Heart and the Good Conduct Medal. He was discharged in 1946.

Grandpa Joe returned to Laredo after the war and married his childhood sweetheart, Petra Ofelia Tijerina. They were married for thirty-five years and had six sons. Ultimately Jose made a career working at Central Power and Light (CPL) and retired after twenty-five years. Shortly after he retired his wife Petra was diagnosed with cancer. She succumbed in 1982.

After ten years as a widower, the good Lord blessed Grandpa Joe with a loving and caring companion, Maria Garcia, who he married in 1994. She was always supportive and enjoyed spending time with him in the backyard, at the grocery stores, and with the extended family.

Grandpa Joe had a long and blessed life. Despite losing his father when he was only three years old and the love of his life after thirty-five years of marriage, Grandpa Joe was a hopeful man. His hope was based in knowing the joy of the Gospel. Every day was a new day and brought with it countless opportunities to make someone laugh, enjoy someone’s company, praise our Lord, and to be grateful for yet another day of life. We are sad that he is no longer with us, but are also hopeful, that we will see him soon enough. Until then, we will love and live life as Grandpa Joe taught us.

The family would like to express their sincere gratitude to Monsignor Tom Davis and Father Juan Mercado for visiting with Grandpa Joe and to Frances “Lolo” Hayes and Rosa Villa-Cendejas, who helped care for Grandpa during his final days.

Funeral services will be held Monday, July 23, 2018, departing at 9:30 a.m. from Joe Jackson North Funeral Chapel to St. Patrick Catholic Church for a Mass of Catholic Burial at 10:00 a.m.

Rite of Committal and Internment will follow in the Calvary Catholic Cemetery.

Calvary Catholic Cemetery
To order memorial trees or send flowers to the family in memory of Jose Arredondo, please visit our flower store.