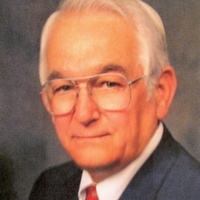 John Clayton Baum was born the fourth of five children to Moses & Irene (née White) Baum in Cross Plains, Texas on August 20, 1931. J. Clayton Baum moved with his family at the age of eight to McAdoo, Texas. He attended schools there and graduated from McAdoo High School in 1948.

Clayton proudly served in the U.S. Army, stationed in Washington State, Japan, and Korea from 1954-1956. He married the Love of his life, Jamie Nell Simmons of Spur, Texas on March 28, 1957.

After graduating from Texas Tech University in Lubbock, Texas with a Bachelor of Business Administration degree in 1959, Clayton went on to earn a Certificate of Public Accountancy in 1960 which garnered him a position with the renowned international accounting firm, Ernst & Young (then Ernst & Ernst).

Opening Ernst & Ernst’s first branch in Laredo, Texas in 1962, Clayton and Jamie welcomed their only child, Kurt, into the world in 1963 (with gratitude to the late doctors Margaret and Leo Cigarroa).

Clayton worked in the Trust department of both Laredo National Bank and Union National Bank of Laredo, Texas in the 1960s-‘70s before returning to full-time public accounting with Gonzalez, Farias, and Guerra of Laredo in 1982.

In 1987 Clayton established his own accounting firm in Laredo, to be joined in partnership with Gerardo Mejia, CPA in 1993. After 2003 when Mr. Mejia established his own accounting firm, Layton brought Aaron Canales, CPA, and Juan Jose Garza, CPA into his firm. Mr. Canales and Mr. Garza eventually purchased his practice in 2010. In honor of Clayton’s legacy of exacting professional standards and reputation, Mr. Canales and Mr. Garza opted to retain the name of J. Clayton Baum, CPA in their business title, Canales, Garza, & Baum PLLC.

During his nearly sixty years in Laredo, Clayton was an active participant in building Laredo’s community, taking membership and volunteering with the Knife and Fork Club, Del Mar Betterment League, Laredo Rotary Club in which he was awarded a Paul Harris Fellow recognition, the Salvation Army, Laredo Rifle & Pistol Club, served as Campaign Chairman and President of the Laredo United Way, as well as serving on the Board of Directors of various civic organizations and businesses in Laredo. Clayton was a member of Laredo’s Northside Church of Christ.

Clayton is survived by his devoted wife, Jamie, son Kurt, and numerous loving nieces and nephews.

Jamie and Kurt Baum would like to convey their deepest gratitude to Dr. Ildefonso Flores for his compassion and caring for Clayton for many years. Also, many thanks to Clayton’s former business partners and associates for all of their continued support.

At Clayton’s request, there will be no viewing or funeral services. Funeral arrangements are under the care of Joe Jackson Funeral Home, North Laredo, Texas and Zapata Funeral Home of Spur, Texas.

Clayton will be interred in the Spur, Texas Memorial Cemetery.

To order memorial trees or send flowers to the family in memory of John Baum, please visit our flower store.