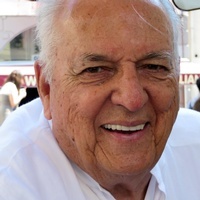 On Sunday, September 30, 2018, on the day of the Lord and having been surrounded by his family, Mr. Howard E. Ruhlman entered into the presence of the Almighty.

Howard was born and raised in Laredo, Texas where he graduated from Martin HS in 1951. He then enlisted in the Air Force and served for 4 years, serving in Japan and Laredo, after which he was Honorably Discharged. He then attended the University of Texas at Austin and earned his Business Administration Degree. His first job out of college was with Texaco where he excelled in the oil and gas industry traveling all around South Texas. He then branched out on his own, back in Laredo, as General Manager of Tom Yates Petroleum. His sharp business acumen led him to many ventures over the years including building and operating convenience stores, car washes, and real estate. Howard was always involved with various clubs and organizations over the years where he enjoyed serving, including but not limited to: the Gateway Rotary Club where he won the Paul Harris Fellowship Award, the Board of Directors with the Bank of Commerce, and as a proud Tiger, the LaredoISD Martin Tiger Legends. He enjoyed traveling, golfing, billiards, playing cards, hunting, and being with friends & family.

Howard loved life and everyone in it. He was an inspiration to his family and friends and he will be missed by all.

He was preceded in death by his parents, Howard O. Ruhlman and Carlota Ruhlman; and by his son, Albert Martin Ruhlman.

The family would like to acknowledge and give special recognition and gratitude to the following friends who were so important in his life: Mona Hachar, Sonia Ortiz, Bill Terry, Sr., Tom Yates, Jr., Rey Rodriguez, Dennis Nixon, Abe Wilson, Alfred Ray Leal, Meme Escamilla, Ignacio Urrabazo, Jr., Glen Jackson, Carlos Sanchez, Buddy Bruni, and so many others... thank you; as well as his caregivers: Mina Mendoza, Juana Castillo Hernandez, and Jose Medrano Guerrero.

The family will receive condolences the evening of Wednesday, October 03, 2018 from 4 to 7 p.m. at Joe Jackson North Funeral Chapels & Cremation Services, 1410 Jacaman Rd; where a Vigil for the Deceased and Rosary will be conducted at 7 p.m., Glen Jackson will be giving the eulogy. Evening visitation will conclude at 8 p.m.

A Mass of Christian Burial will be celebrated at 9:30 a.m. on Thursday, October 04, 2018 at San Martin de Porres Catholic Church. Funeral Procession will depart at 9 a.m. from Joe Jackson North Funeral Chapels. Lectors for the Mass will be Peg Kresta and Pam Tidwell.

Calvary Catholic Cemetery
To order memorial trees or send flowers to the family in memory of Howard Ruhlman, please visit our flower store.