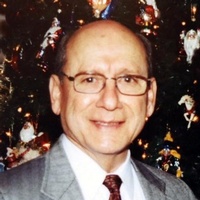 Heaven welcomed a beautiful soul on Tuesday, October 16, 2018 when Guadalupe C. Martinez, Jr. passed away peacefully at home surrounded by his loving family after a long battle with Alzheimer’s disease. His spirit is carried on by his loving wife, Graciela, two daughters, Marissa (Glen) Jackson, Laura A. Wheat and grandchildren, Avery Wheat and Pierce Linton.

Lupe was born on March 9, 1929 in Laredo, Texas and graduated from Martin High School in 1948. He served our country in the United States Air Force from June 1951 through June 1955 as a Senior Airman during the Korean War. In October 1952, he was transferred to Japan for one year serving as a Radio Operator. He flew many cargo missions from Japan to Korea during this tour of duty in the Far East. Following his service, he attended Texas A&I University in Kingsville. In 1959, he married his beautiful wife, Graciela Garcia Martinez.

Lupe worked for the Internal Revenue Service from 1962 until his retirement in 1989. Immediately afterward, as an Enrolled Agent with the IRS, he opened his business offering accounting services and tax assistance. Lupe was a devout Catholic and a member of St. Patrick Church since 1970, offering many volunteer hours with the Men’s Club.

Lupe raised his daughters to be happy, loving, successful women and for that, they are eternally grateful. He cherished every moment he spent with his two grandchildren, Avery and Pierce. His fun loving and witty personality will never be forgotten as it lives on vibrantly in his family and friends. His family will continue to celebrate the fulfilling life he led and his memory will always be a blessing to those who loved him.

Military Honors will be provided by the United States Air Force Honor Guard after Mass.

In lieu of flowers, the family kindly requests that you consider making a donation in his memory to the Alzheimer’s Association, P.O. Box 96011, Washington, DC 20090-6011, http://act.alz.org/goto/Guadalupe_C_Martinez.