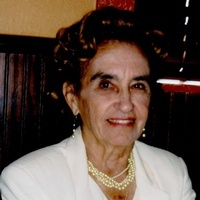 Gloria G. Dabdoub, age 94, of Laredo, TX, entered into the presence of the Almighty on Monday, December 17, 2018 surrounded by her beloved family. Gloria was an amazing and devoted mother, wife, and grandmother.

She was extremely talented as a baton twirling teacher and choreographer. Throughout her years at Martin High School, she was a Band Majorette, winning the honor of 1st Place in baton twirling at a regional competition. In the summers, throughout high school, she studied baton twirling at the Vander Cook School of Music in Seguin Texas. After graduating from Martin High School in 1944, she attended Texas Lutheran College to train in baton twirling under the direction of two former national baton twirling champions. Her love of baton twirling led to her opening her baton twirling school on June 14, 1954, with 22 students. Gloria instructed generations of baton twirlers at her home on Rosario Street over the following 40 years. Her Daborette Twirling Corp, competed throughout the United States, bringing home numerous trophies, which she proudly displayed in her home. Gloria and her Daborettes participated in the WBCA Parades and she would design and decorate a new Daborette parade float every year, as well as the costumes the twirlers wore. In addition to, she sponsored the Ursuline Academy Cheerleading Squad for a year, and she directed and choreographed the recitals at Blessed Sacrament School. As the saying goes “Once a Tiger Always a Tiger.” Gloria, along with Emilio Jacaman, and Hilario Cavazos kept in close contact with their classmates and planned several memorable Class Reunions, which she hosted at her home, in her beautiful backyard. Gloria also loved music and enjoyed playing classical music on her Baby Grand Piano. She would often say that her favorite moments in life were playing the piano with one of her grandchildren or great-grandchildren sitting next to her: in those moments she felt ageless. In addition to her many artistic talents, she was very spiritual, being an active member of the Blessed Sacrament Altar and Rosary Society for over 20 years. Gloria was very compassionate and loving, which was exemplified in the way she loved and cared for her family.

The family will receive condolences on Friday, December 21, 2018 from 5 p.m. to 9 p.m. at Joe Jackson Heights Funeral Chapels, 719 Loring at Cortez, with a Vigil for the Deceased and Rosary at 7 p.m.

Funeral Services will be conducted on Saturday morning, December 22, 2018, departing the funeral home at 8:30 a.m. to Blessed Sacrament Catholic Church for a Mass of Christian Burial at 9 a.m.

Calvary Catholic Cemetery
To order memorial trees or send flowers to the family in memory of Gloria Dabdoub, please visit our flower store.