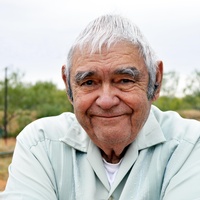 Genaro A. Hinojosa, 84, was a hardworking, humble, and kind man who was a hero in the eyes of those who knew and loved him. He was a U.S. Army veteran who served abroad in Korea, Germany, and England and who true to his patriotism, passed away on Memorial Day, May 28, 2018.

Born March 4, 1934 in Laredo, he was the oldest child of Genaro and Maria Magdalena (Arce) Hinojosa. Service to country was important to Genaro and he entered the U.S. Army after he graduated from Martin High School in 1953. Upon returning to Laredo, he joined his father as a police officer with the Laredo Police Department for 11 years before starting a 25-year career at the Texas Employment Commission. Never one to remain idle, he shared his life lessons in the classroom as a substitute teacher in UISD for 15 years.

A caring and compassionate person, Genaro believed in the goodness of people and left an impression on those he met. He made friends easily and enjoyed making people laugh with his playful sense of humor. A favorite pastime was spending time on his ranch outside of Laredo where the family has many dear memories of barbeques, Easter egg hunts, and campfires. He had a green thumb and enjoyed gardening and tending to his orchard -- his lemon tree is legendary. Genaro had a fondness for birds and raised parrots, parakeets, and canaries. He read the Laredo Times daily and in his later years enjoyed watching old war movies, westerns, and novelas. He loved to travel with his wife, visiting daughters in Virginia and Kentucky as well as traveling throughout Mexico.

Genaro was a remarkable man who touched the hearts of many people and whose own life was an example of how to live happily and honorably. He made many sacrifices so his family could have a better life. He believed in the value of learning and hard work. He encouraged his children and grandchildren to obtain a good education and was proud of their accomplishments. Though he faced serious health issues, his grit carried him to the end. He gave his all without a word of complaint and always with a smile on his face. He is deeply missed by his family and all those who love him.

He is now reunited with the love of his life, his wife of 58 years, Sylvia Solis Hinojosa. From the moment he saw her he was completely captivated and his love and devotion only grew with time. She remained the most beautiful woman in his eyes and he was faithfully dedicated to her until his last breath.

Family and friends are invited to celebrate his life on Monday, June 04, 2018, from 5 to 9 p.m. at Joe Jackson North Funeral Chapels & Cremation Services, 1410 Jacaman Road; where a Vigil for the Deceased and Rosary will be recited by Deacon Joe Longoria at 7 p.m.

Funeral Services will be conducted on Tuesday, June 05, 2018, departing at 8:40 a.m. from Joe Jackson North Funeral Chapels to St. Patrick Catholic Church for a Mass of Christian Burial at 9 a.m.

Rite of Committal and Interment will follow at the family plot in the Laredo City Cemetery.

Laredo City Cemetery
To order memorial trees or send flowers to the family in memory of Genaro Hinojosa, please visit our flower store.