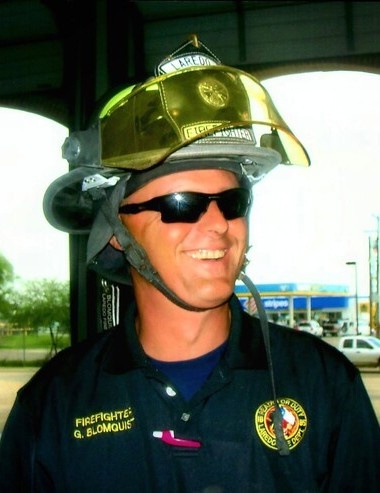 Gary Wallace Blomquist, age 53, passed away on Thursday, December 16, 2021 at Doctors Hospital. He was surrounded by family when he joined our Lord in His Heavenly Kingdom.

Gary was born on November 5, 1968 in Hildesheim, Germany, and was adopted and raised by Graham Wallace & Maria Rebecca Blomquist, in Florida. He graduated from Satellite High School in 1987 and immediately enlisted in the Army, where he served for six years before going on to Laredo Community College to earn an Associate's Degree in Science. Gary joined the Laredo Fire Department in 2003, alongside his academy brothers, and had dedicated his life to protecting the people of Laredo for more than 18 years. On his days off he worked as a paramedic/EMT at a private ambulance, helping to serve his community.

Besides work, Gary had a profound love for grilling, motorcycle rides, and most of all- family. It is said that a way to a person's heart is through their stomach and Gary knew exactly how to do that. His favorite pastime was sparking up the grill, popping open a beer, and enjoying the day surrounded by the people who loved him so dearly. Gary had a strong yet warm presence and always welcomed people into his life with open arms. He was an amazing husband, the best father, a dear friend, and a very loved family member. No words can explain how much he will be missed.

He was preceded in death by his mother Maria Rebecca Blomquist and his brother Robert Blomquist.

Left to cherish his memory are his loving wife of 25 years, Virma Blomquist; his children: Geoffrey Blomquist, Corey Blomquist and Serena (Travis) Flatt; his granddaughter, Sofia Lumaye; his father, Graham Blomquist; his brother, Mike (Sheila) Blomquist; his sister, Sandi (Jack) Capra and numerous others who had the honor to be grazed with his presence.

The family will be receiving condolences on Monday, December 27, 2021 from 4 to 9 p.m. at Joe Jackson North Funeral Chapel & Cremation Services, 1410 Jacaman Rd.; where a prayer service will commence at 7 p.m.

Funeral procession will depart the chapel at 9:15 a.m. on Tuesday, December 28, 2021 to his beloved Fire Station #9 for his final trip and then will continue to the Laredo City Cemetery-Veterans Pavilion for the rendering of the Military Honors and Fire Department Honors.

The family would like to extend their most heartfelt gratitude to everyone who has kept them in their thoughts and prayers and during this most difficult time. It is through everyone’s friendship, sympathy, and heartfelt condolences that they are comforted. A most sincere thank you to the Laredo Fire Department and their brothers and sisters for being a helping hand in all of this.

In lieu of flowers, a memorial donation may be made to the Gary W. Blomquist Memorial scholarship fund which will help future members of the academy grow in their career.

To order memorial trees or send flowers to the family in memory of Gary Blomquist, please visit our flower store.