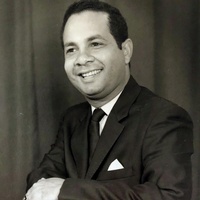 Francisco Rafael Lopez, age 83, entered peacefully into eternal rest on Saturday, April 6, 2019 at his home surrounded by his loving family after a courageous battle with brain cancer.

“Fran” as he was affectionately called, was born in Tamboril, Dominican Republic on October 14, 1935. In 1961, he immigrated to New York and began his quest for the American dream. While he lacked a formal education, he was a self-taught man of principles, exceptional work ethic, humility, and integrity. He owned several successful businesses in New York and later in Laredo. In 1988, he made Laredo his home and never left. He loved Laredo and Laredo loved him right back. He selflessly contributed his time and resources to numerous organizations and was never a man to say no. He was inducted into the Latin American Hall of Fame and recognized by the City of Laredo.

His biggest accomplishment, as he would say, was marrying the love of his life, Angela Minerva, who he simply loved beyond measure. Their fifty-four years of marriage was truly a testament of their devotion to one another and some would say our mother’s legendary cooking. His greatest joys were his daughters, Madeline and Angie and for us he was the world’s greatest father. He was most proud of being a grandfather. He loved to car pool his grandchildren, watch them play all kinds of sports, attend recitals, and he particularly enjoyed quiet Sunday afternoons watching football, baseball, basketball, or his favorite golf while being surrounded by them and his son-in-law Jimmy.

Fran loved politics, a good game of dominos, jaunts to Las Vegas, and baseball. His greatest pleasure was just being in company with family and friends. He will be remembered by those he touched as a kind, generous, and fiercely loyal spirit.

The family would like to extend a special thank you to his physicians, caregivers, and hospice care for making possible that his remaining days were lived to the fullest.

The family will be receiving condolences on Friday evening, April 12, 2019 from 5 to 9 p.m. at Joe Jackson North Funeral Chapel & Cremation Services, 1410 Jacaman Rd.; where a Vigil for the Deceased and Rosary will commence at 7 p.m.

Funeral Services will be held on Saturday afternoon, April 13, 2019 with a Mass of Christian Burial to be celebrated at 2 p.m. at St. Patrick Catholic Church, 555 E Del Mar Blvd. All attending are asked to please meet at church.

Services will conclude at the end of the mass, a private cremation will be held at a later date.

In lieu of flowers, the family requests that a charitable contribution in his name be considered to: the Children’s Advocacy Center of Laredo, Casa De Misericordia or St. Jude’s Children’s Hospital.