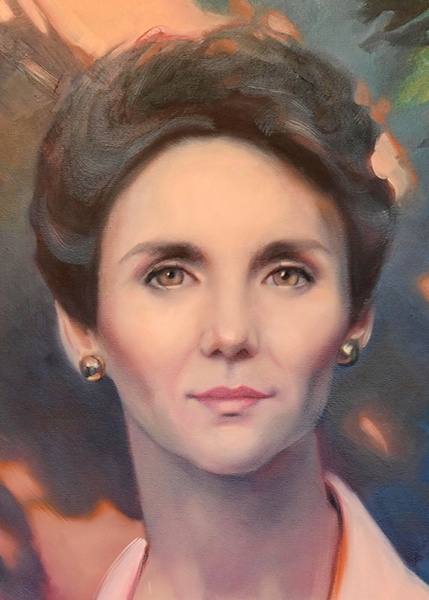 Ethel Martha Leyendecker Arguindegui, born February 22, 1938, passed away on Holy Thursday, April 1, 2021.  Ethel passed peacefully in her home, with her loving children by her side.  Heaven received an angel.  Ethel is now in the loving arms of our Lord Jesus Christ and undoubtedly, she is happily surrounded by all her loved ones in heaven.

She was preceded in death by her loving parents, Maria Estela Palacios and Alfonso Santa Anna Leyendecker, her only brother, Alfonso A. Leyendecker Jr., her cherished sisters, Magdalena Leyendecker Zuniga and Lucia Leyendecker Curtain, her devoted, beloved husband and partner in life, Peter R. Arguindegui, Jr., and her brother-in-law, Carlos H. Arguindegui.

Ethel was raised in the historic childhood-home of her father, at 204 Flores in downtown Laredo.  She attended Ursuline Academy.  There, Ethel would form life-long friendships, that she always cherished.

After graduating from Ursuline Academy in 1956, she attended the University of Texas, pursing her passion for interior design.  Ethel returned to Laredo, landing a job at the famed downtown Sears, Roebuck & Co.  At the time, little did Ethel know she would have a chance encounter with Peter, a familiar face from her childhood.

Peter knew Ethel, as the childhood friend of his sister, Maria Teresa.  Their parents were "Compadres."  Years later, when they crossed paths again, he asked in amazement: "Are you Ethel Leyendecker?"  And, the rest is history.  Peter knew instantly Ethel would be his bride, dazzled by her beautiful eyes, smile, her beautiful heart and fun-loving spirit.  That very night, he famously announced to his beloved Mother, Marina, that he was determined to marry Ethel. Their families were thrilled.

Ethel married Peter on October 21, 1961, in the Cathedral of San Agustin, just across the Plaza from her childhood home.  They were married for 52 years before his passing in 2014, raising five strong and independent children.

She was a silent leader, guiding her children with love, grace, wisdom, patience, kindness and devotion.  Ethel led by example.  Fiercely supportive, she rarely missed an opportunity to be present and the loudest parent cheering her children on in all of their pursuits.

Ethel was a devoted Catholic and long-time parishioner at St. Patrick Catholic Church.  She instilled the importance of faith in her children and grandchildren.  Her unwavering faith guided her in all ways.

Although busy raising five children, she supported the Laredo community and her charitable endeavors.

After raising her children, Ethel was able to fulfill her awe-inspiring sense of fun, adventure and love of travel.  She was the life of any event she attended and was the first to dance and be joyous

Ethel led a wonderful, meaningful, long life.  Anyone lucky enough to know her was better off because of that interaction.  She was a devoted, loyal and loving wife, mother, sister, daughter and friend.  Ethel had a heart of gold and made everyone around her feel wanted and special.  Her compassion and empathy for others was unrivaled.

She loved her life-long friends and spent many happy times with them in their walking group and playing cards.  No one can forget the “Target Coffee Group.”  Those who knew Ethel know she's formed a walking group and started a card game in heaven.

Ethel was immensely proud of her family, and leaves behind nothing but beautiful memories.  She was devoted to her five children and seven grandchildren.

Affectionately known to her grandchildren as "Nana," she showered them with unconditional love and support.  She fostered a unique, special and very close relationship with each of her grandchildren.  She was never one to miss a “Grandparents Day.”  "Nana" is deeply loved and cherished, and will be greatly missed by them, Amelie Arguindegui, Pedro Ramon Arguindegui IV, Alfonso Illan Arguindegui (Paloma), Maximiliano Arguindegui, Alejandro Diego Arguindegui, Carlos Antonio Johnston and AnaSofia Arguindegui.

Ethel is survived by her sisters, Maria Estela Leyendecker Boudreaux and Victoria Leyendecker Duffield.  She was also very close to her husband’s family, and will be greatly missed by her sister-in-law, Maria Teresa Arguindegui Regnier and many nephews, nieces and their families.  She will also be greatly missed by her loving, devoted and loyal caregivers who never left her side until her death.

In lieu of flowers, memorial donations in Ethel’s name may be made to her favorite charity: Sacred Heart Children’s Home, 3310 S. Zapata Hwy., Laredo, TX 78046.

The family will receive condolences from 8 am until 10 am at on Thursday, April 8, 2021 at Joe Jackson North Funeral & Cremation Services, 1410 Jacaman Rd.

Funeral procession will depart at 10:30 am from the funeral chapel to Blessed Sacrament Catholic Church for a Mass of Christian Burial to be celebrated at 11 am.

To order memorial trees or send flowers to the family in memory of Ethel Arguindegui, please visit our flower store.