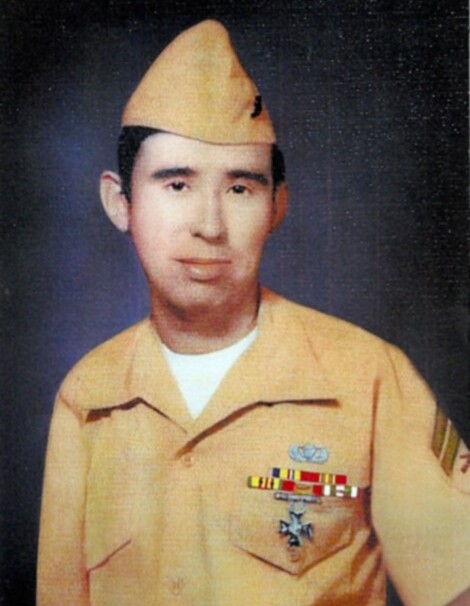 In memorandum of Mr. Ernesto Elizalde Jr. who serviced with great distinction and valor as a United States Marine.  Mr. Elizalde serviced in Vietnam for 2 years as a United States Marine with the Port Division Recognizance Airwing in Chu Lai, Vietnam.  He was a Rifleman who received the following commendations:  National Defense Service Medal, Vietnam Campaign Medal w/device, Vietnam service Medal w/l and Rifle Sharpshooter Badge, including Good Conduct Medal in June 1968.  He was honorable discharged and transferred to Marine Corps. Reserve out of San Antonio, TX for 11 years continued in the Texas Army Reserve and the Texas National Guard.  His retirement from military service in 2001.

In 1972 as a civilian Mr. Elizalde was contracted by the Dept. of Defense as a Security Police maintaining security of the base grounds at Laredo Air Force Military Base.  Mr. Elizalde went on to Laredo Community College the Police Academy in Laredo, TX with the 2nd graduating class.  Subsequently worked at Laredo Airport as an Airport Police with the City of Laredo.  At the Tex-Mex Rail Road he continued to work 20 years as a welder and lineman.  He received his retirement from Tex-Mex Railroad.

After his retirement he joined the Vietnam Veterans Organization, Veterans of Foreign Wars, he was a member of the Honor Guard for 16 years with American Legion Post 59, Catholic War Veterans, LULAC #12 and was a Member of the Marine Corp. League, and Veterans Coalition.

Overall, he was loved and respected by his family and friends for his kind and gracious nature.  He was always available to assist any fellow comrade, family or friend in need.  He greatly enjoyed traveling with his wife and participating in family gatherings and events.  He truly enjoyed his life alongside the love of his life his wife Rosa, including his children and grandchildren.   Mr. Elizalde loved to dance with his wife at social gatherings.  At this time, we celebrate his life a pillar in both his family and his community.

He was preceded in death by his parents, Ernesto and Maria Luisa Elizalde, Sr.

The family will be receiving condolences on Tuesday evening, January 19, 2021 from 4 to 7 p.m. at Joe Jackson Heights Funeral Chapels & Cremation Services, 719 Loring at Cortez; where a Vigil for the Deceased and Rosary will commence at 7 p.m.

Funeral Services will be held on Wednesday morning, January 20, 2021 departing at 9:30 a.m. from Joe Jackson Heights Funeral Chapels to Christ the King Catholic Church for a Mass of Christian Burial at 10:00 a.m.

Rite of Committal and Interment will follow at the family plot in the Laredo City Cemetery where Military Honors will be offered by the U.S. Marine Corp. and the Local Post 59.

Honorary pallbearer will be: Ruben Rodriguez.

The family would like to extend their most heartfelt gratitude to Juan and Margo Guardiola, Nina Rios, his nurse, Sylvia Flores, provider, Letty Martinez and other friends for providing care during Ernesto’s time of need.

To order memorial trees or send flowers to the family in memory of Ernesto Elizalde, Jr., please visit our flower store.