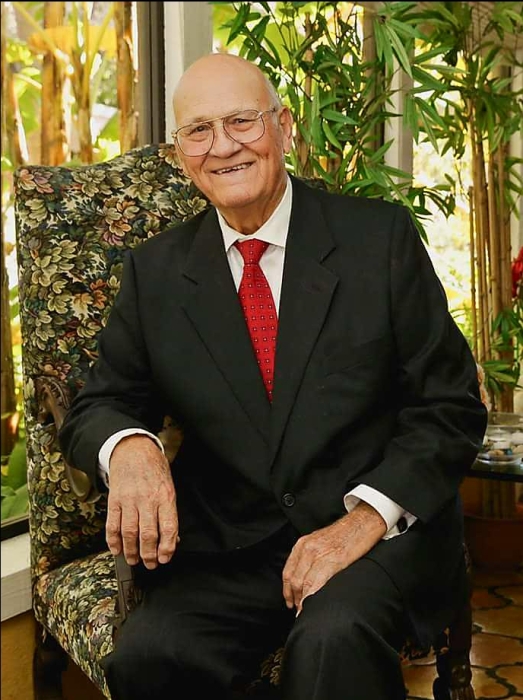 Elmo López, Sr. was many things to many people.  To his family, he was a husband, father, grandfather, great-grandfather, uncle, brother, and patriarch.  To his fellow Laredoans, he was a music store entrepreneur, rancher, civic leader, and a proud promoter of his beloved Laredo.  To his many students, he was a teacher, mentor, and band director.

By his own standard, he lived a beautiful and blessed life.  If wealth was defined by his many friends, then he died a rich man.  He was a happy gentleman who preferred the simple things in life like an early morning cup of coffee, doing the crossword puzzle in ink, standing up to greet you, taking off his hat when entering a room, and visiting with you face to face instead of over the phone.  He loved everyone equally.  He believed that punctuality was a courtesy, a duty and a sign of respect.  While his firm handshake would get your attention, it was always accompanied by a hearty smile and a loving abrazo.

He was known as a music man, cattleman, and civic leader, but his favorite role was that of a family man.  He shined brightest when surrounded by his wife, children, grandchildren and great-grandchildren.

The family ranch was his refuge.  It’s where he went to feel the breeze, work his cattle and spend time away from the hustle and bustle of everyday life.  At the ranch, López cherished what other people saw as work.  He truly enjoyed feeding cattle and fixing fences and spending time outdoors.  He traveled to livestock auctions and bought and sold cattle alongside giants of the industry like cattlemen from the King Ranch to former Governor John Connally.

The ranch was a tool that he used to teach his children, grandchildren, and many nephews and nieces the values that a ranch offers.  Get up early, put in the work, saddle your own horse, know that glory only follows hard work, no task is beneath you, treat all creatures with respect, be self-reliant, and in times of need help mend your neighbor’s fence.

He journaled every major life event in a leather-bound calendar at the ranch.  Decades of birthday’s, weddings, anniversaries, high school and college graduations along with the births of his children, grandchildren and great grandchildren.  New jobs, phone calls with family members and so much more.  If it was important to him, then it made the journal.

López insisted that all digital photos be printed, so that he could frame them.  The walls of the ranch house are not made of stone, they are made of memories of family and family gatherings at the ranch.  Those photos allowed him to revisit those special moments every day that he entered the ranch house.  That way, even if he was alone, especially, in the wee hours of the morning before the sun came up, he was still surrounded by family.

López taught his grandchildren how to play cards, but he placed his bets with peanut M&M’s instead of money.  While fun was had on both sides, his ulterior motive was to teach them how to win graciously.  An important lesson as they seemed to win more often than he did.  But it was also important for them to understand how to cope with losing.  Though, coping often came with an extra serving of peanut M&M’s – but for eating, not for more betting.

Attire was also a sign of respect.  When you went out to an evening affair or family Christmas gathering, he expected his family to look “presidential.”  It was a way to honor your hosts, your church and your friends.  He too would look presidential, but he was at his most comfortable in khakis, boots, a Carhart jacket and a tattered Stetson that weathered more years than it should have.

God and family came first and he instilled in everyone within ear-shot, that a good education was an investment in the future and the notion that if you study hard and work hard, opportunities would follow.  When his former students would stop him in public, they often thanked him - not just for his teaching skills, but for caring about them as individuals.  For inspiring them, guiding them, molding and shaping them, teaching them about character, integrity, dedication, respect and how to give back to their community by helping those in need.  He reveled in their success and beamed with pride in seeing them as adults.  He demurred in their praise of him and reminded them that their success came through their own hard work, good decision-making and focus.

Of course, no conversation with a former student ended without inquiring about educational opportunities – perhaps a post graduate degree might be in their future, or an undergraduate degree for their children.  And at the heart of those conversations was his love for his alma mater, The University of Texas At Austin.  López was known to suggest, inspire, nudge, and even cajole students into furthering their education.

He believed in servant leadership, helping wherever he could.  He raised money for scholarships and matched local money with scholarship money from UT Austin to ease the financial burden on Laredo students destined for UT.  When out-of-state schools offered more money and attempted to recruit them away, he preached the value of UT and encouraged them to stay close to home to be near family and he usually got his way, to the benefit of those students.

López, founded the Laredo Chapter of the UT-Exes in 1987 and gave back much of his time and energy to the University including twelve years of service on the board of directors of the UT Dad’s Association becoming the organization’s president in 1986.

Over the years, he rubbed elbows with some of the great musicians and conductors of his time – even having conducted the United States Air Force Band and the presidential band of Mexico.  But he never lost that part of him that called Laredo home.  That’s why he came out of retirement to become the first director of bands at Texas A&M International University – to share his love for music history and appreciation with a new generation of students.  In May 2006 he received an honorary Doctorate of Humane Letters Degree from TAMIU for his years of service.  “Music develops the mind, communicates cultural heritage, and serves as an international language,” he once said.

He entered college during the golden age of the big bands led by Benny Goodman, Tommy Dorsey, Glen Miller, Artie Shaw and Harry James.  In fact, it was famed trumpeter James that inspired López to take up the trumpet and start his own band, Elmo López and his Orchestra.  His many gigs in college helped him pay for his tuition, though the long hours and weekend engagements left him little time for his then-girlfriend, Consuelo Flores. “When I was playing first trumpet, she ended up playing second fiddle,” he once said regretting the little time his grueling schedule left him.

During those college playing days, he admitted that because of his Mexican-American heritage, he was expected to play a certain genre of Spanish language music, but his repertoire only included three of those songs.  So, he would weave those songs in with the big band classics.   Each time the party guests would request more of the boleros, he would play the same three songs again, but in different tempos hoping no one would notice.

The musical talents of Elmo López are well known on both sides of the Rio Grande.  The Texas Legislature recognized him for promoting goodwill between Mexico and the United States through musical exchange programs.

His musical achievements, honors, recognitions and awards are too many to list, but one in particular gave him great pride.  Over the years, he had many conversations with his UT Austin music professor and famed composer James Clifton Williams.  Williams was so moved by the passion López carried for music and cultural heritage that in 1963, he composed the Laredo Paso Doble in honor of López.  The musical composition premiered in Laredo, Texas and Nuevo Laredo, Tamaulipas, Mexico, at a concert in May of that same year and was dedicated to López and the Martin High School Band, which López directed from 1954 to 1963.

López was a giant in every sense of the word.  In the classroom, in the band hall, on the ranch, and as a family patriarch.  He set a high bar for others to emulate.  His passing marks the end of an era.  No tribute, not even this one, can ever truly do him justice.

He was the leader of the band and was a kind and inspirational teacher. He was the ultimate principled cattleman who taught young teens the value of hard work on the ranch.   And he carried the class and grace of a gentleman throughout his long and blessed life.

He was a humble man and would not want people paying so much attention to him or grieving his passing.  Easier said than done because he inspired too many people, moved too many mountains, and loved and cared so heartily.

So how do you say goodbye to a loving soul like Elmo López?  During this COVID-19 pandemic, gathering together at his funeral is still too risky.  For the time being, tip your hat, be kind, practice servant leadership and you will truly honor his memory. Not a fan of farewells, López was always confident he would see you again soon and preferred not to say “goodbye.”  So, we will honor this tribute to his life with his favorite despedida.  “See you Monday.”

Elmo was preceded in death by his parents Jose Maria and Maria Piña López and by his daughter Ana Laura López. Also preceding him are his in-laws Brigido H. and Consuelo Martinez Flores; his sisters, Ofelia (Roberto+) de la Pena, Josefina (Walter+) Price and Maria (Jose+) Martinez; brothers Alonso López, Jose Maria (Sylvia+) López, Humberto López and his brother Ruben (Hilda+) López with whom he was especially close throughout his life.

The Elmo López family acknowledges the excellent and compassionate attention given by his care-givers Maria Luisa Reyes Avila and Mari Avila Reyna.

The family welcomes donations to the Ana Laura López Memorial Scholarship Fund, payable to the Laredo UT Exes, Inc., 7917 McPherson Road, Suite 203, 78045 as an expression of sympathy in lieu of flowers.

**In keeping with our social responsibility amidst this time of pandemic, the family requests all that will attend the Mass of Christian Burial and Interment to adhere to the protocols in place in order to safeguard and protect each other.  Live Streaming of these events will be posted on the funeral home Facebook live.  For information and links, please look at the online obituary. **

Due to the occupancy restrictions of the COVID-19 pandemic, the family will hold a private Visitation and Rosary on Monday evening, March 22, 2021 at 7 p.m.

The public is invited to attend the Mass of Christian Burial on Tuesday, March 23, 2021 at 9 a.m. at Blessed Sacrament Catholic Church, with Rev. Jose Guadalupe Cadena as the celebrant. All attending the mass are asked to meet at the church beginning at 8:30 in the morning.  There will be no procession.

Rite of Committal and Interment will follow in procession to the family plot at the Calvary Catholic Cemetery.

A public Celebration of Life and Memorial Service will be held at a later date to be announced.

To order memorial trees or send flowers to the family in memory of Elmo Lopez, please visit our flower store.