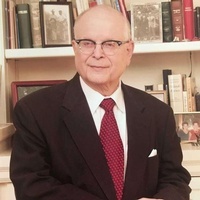 Dr. Joaquin Gonzalez Cigarroa, Jr. devoted his beautiful and noble life to serving not only his family but also his beloved community of Laredo, Texas. Blessed with a keen intellect, fine-tuned soul, and compassionate heart, Dr. Joaquin practiced the art of medicine, and the art of living, in the spirit of R. Tagore’s verse: “I slept and dreamt that life was joy. I awoke and saw that life was service. I acted and behold, service was joy.” With a missionary’s zeal, he fought for improved access to healthcare and educational opportunities throughout a lifetime guided by his love of family, faith and service to his community.

Born in San Antonio, Texas on May 5, 1924, Dr. Joaquin moved to Laredo, Texas in 1937 with his beloved family: his father, Dr. Joaquin Gonzalez Cigarroa, Sr., his mother, Josefina Luisa Gonzalez de la Vega, and his siblings, Leonides and Rebeca. By the age of eight, he was already accompanying Dr. Joaquin, Sr. on house calls having discerned early on in his boyhood that his calling was medicine. With this in mind, he applied himself vigorously to his studies and graduated from Martin High School in 1941 as valedictorian. He attended University of Texas then Harvard Medical School, where he received his medical degree when he was only twenty-three years of age. Dr. Joaquin carefully guarded the wisdom imparted by his Harvard mentors, such as his anatomy professor, Dr. Robert Green, who once said, “Gentlemen, respect the cadaver. It was once the abode of the human soul.” Guided by such luminaries, he specialized in internal medicine and subsequently worked as a teaching fellow. He then served as a first lieutenant with the U.S. Army Medical Corps before returning to Laredo where he started his practice alongside his father and brother in 1954.

Soon after returning to Laredo, he met the love and joy of his life, Barbara Judith Raymond Flores, affectionately known as Bobbie. Her inner and outer beauty mesmerized him as he recognized her radiant spirit and deep faith. Bobbie allowed him the full freedom to practice his career and serve Laredo in his many roles. And Dr. Joaquin, as a husband and father, knew that Bobbie had the rare gift to inform their five sons and five daughters how to live their best lives with joy. Together they symbiotically raised their children and generations to follow on living lives of unwavering confidence in one’s ability to accomplish any vision through hard work, courage and faith. These life lessons were also lovingly shared with his nieces and nephews. In 1973, after Dr. Joaquin’s brother Leo and brother-in-law Marco passed away, leaving 14 nieces and nephews fatherless, Dr. Joaquin, alongside Bobbie, embraced them as their own, always giving them love, support and their many blessings.

Dr. Joaquin was nothing short of a man for all seasons, a legend for time to come. His accomplishments in his professional life were countless and remain enduring to date. He was integral in advancing health care in Laredo including the establishment of the first cardiology unit at Mercy Hospital which he greatly loved as an institution. He served with distinction for two separate terms on the Texas Higher Education Coordinating Board responsible for the state plan to advance education across colleges, universities and medical schools. He played a vital role in the expansion of the University of Texas Health Science Center at San Antonio including the establishment of a dental school and the approval for the UT Health Science Center in Houston. At the same time, he was also a tireless advocate to advance K-12 education in Laredo providing leadership to the Laredo Independent School District, expanding new degree programs at the Laredo Community College as well as making compelling testimony to the Texas Legislature to establish the Texas A&M International University and the UT Health Science Center Regional Campus in Laredo. The impact that Dr. Joaquin G. Cigarroa Jr. has had on educating the next generation of Texans is immeasurable. He accomplished all of this while being a loving and devoted husband and father to his ten children, ministering to his countless patients with infinite love and devotion. He also served as an invested member of the Equestrian Order of the Holy Sepulchre of Jerusalem, as a devoted parishioner in Blessed Sacrament Catholic Church where all of his children were baptized.

Dr. Joaquin will also be remembered for speaking out against publicly issued remarks in 1997, when UT law professor Lino Graglia stated, “Blacks and Mexican-Americans are not academically competitive with whites in selective institutions. They have a culture that seems not to encourage achievement.” A speech he delivered in the State Capitol in Austin, Texas made headlines the next day, when he expressed: “…Our voices have been muted by some, and our presence sometimes rejected. If we do not do what is within our power to respond to the likes of Professor Graglia, and if we do not responsibly assure for the continuation of vibrant diversity and the excellence that it fosters, we must bear in part responsibility for the decline of our great institutions, of general education and of Texas society…All of us involved in education should encourage Texans of every background to attain the highest level of education possible.”

A rosary will be held at 7 p.m., Friday, March 22, at Blessed Sacrament Catholic Church. Although there will not be a formal visitation, attendees may pay their respects to the family after recitation of the rosary.

A Mass of Christian Burial will be celebrated at 11 a.m., Saturday, March 23, at Blessed Sacrament Catholic Church. All attending are asked to meet at the church prior to the start of the Mass.

Rite of Committal and Interment with Military Honors will be held immediately after the mass at the family plot in the Calvary Catholic Cemetery.

In lieu of flowers, the family suggests making a memorial contribution in his honor to Casa de Misericordia, 1000 Mier, Laredo, TX 78042.

Arrangements are under the care and direction and entrusted to the funeral service professionals at Joe Jackson North Funeral & Cremation Services, 1410 Jacaman Rd., Laredo, TX 78041, 956.722.8850