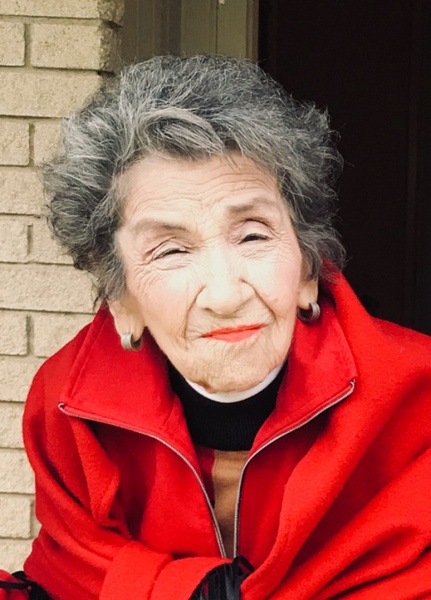 With our hearts overwhelmed by profound grief and sadness, we share our final farewell for our Mother, Delia M. Leal. She took her first breath on December 16, 1917, and her last breath on January 14, 2021, in the arms of her daughter, while listening and praying the rosary being said for her in the house she called home for 62 years.

To chronicle the 37,250 days that she lived on this planet would be impossible. In her lifetime she witnessed women achieving the right to vote. She proudly exercised her right to vote in every

election local, state and national. While she may not have agreed with all of Hilary Clinton’s agenda she was so very proud to have the opportunity to vote for a woman as president of the United States   of America.

Our mom was the first-born child of Juanita Sepulveda and Ciro Martinez in a small house at 1102 San Augustine. She was delivered by a midwife whose name, Harriet, she still remembered up until a year ago. She was joined in the fun and mischief of childhood by two sisters Alicia Martinez (Licha) and Imelda Gonzalez (Mela) and a brother, Ciro Martinez Sepulveda. She was preceded in death by all her family members, her husband Tello of 60 years, and many friends that were very dear to us.

She is survived by her son Tello Leal, (Linda), her daughter Minita Leal, a few cousins, nieces and   nephews, special friends, whom she loved very much.

An early childhood in Laredo came to an end when Papa Ciro and Mama Jennie packed up the kids and moved to the bustling metropolis of Mirando City because our grandfather was the foreman of   an oil drilling company. Laredo was paradise compared to Mirando City so the kids probably weren’t very happy about the move.

Our mother wanted to be an artist and teach piano, so Papa Ciro did what he could to make her dreams come true. He would send her to Laredo every Friday afternoon, riding as a passenger in a caboose in order that she could attend piano lessons on Saturday. For unexplained reasons, mom never finished her piano lessons. Sometimes dreams only remain dreams.

Our mom was a very intelligent woman. She was named Valedictorian of the 1935 senior class of Mirando City High School. Sadly, the next day, she was informed that an error had been made in the computation of grades and she was named Salutatorian instead. Much later in her life she dared to wonder if being Mexican American caused the math error. The honor was for a day but the sadness for perhaps, a lifetime. She was awarded a scholarship to Texas A&I in Kingsville, but could not attend because her parents did not know anyone in Kingsville who she could stay with. Mom told us that she would have liked to study business. Mom began her career at JC Penny’s for $0.10 per hour. That didn’t last long as she was informed of a secretarial position at Randolph Air Force Base in San Antonio. To quote Willie Nelson, she was “On the Road Again,” riding a bus to San Antonio every Sunday afternoon to stay with an aunt during the week while she worked, returning home to Laredo each Friday evening. But for as much as she liked Willie Nelson singing “On the Road Again,” it soon became too much traveling back and forth. She transferred to Laredo Army Airfield in 1942.

Along the way she met a dashing dancing man who rode a Harley Davidson named Eleuterio Leal, Jr. known as Tello. He joined the Marine Corps. and while he was in service, they wrote letters to each other. He sent photos of himself in his dress blues with a huge smile on his face. After returning home he proposed and they married on September 6th, 1947. They lived in the same house where mom was born. In 1950 Eleuterio Leal, III was born. His nickname, Tellito, is the name she called him   the rest of her life. In 1956 a daughter, Minita was born.

The kids grew up with various interests. For Minita it was dance and art classes. For Tellito, it was little league baseball and mom and dad attended every recital and game religiously. Religion was very important to mom who was a regular attendee at Blessed Sacrament Church, until she returned to Christ the King because that was her original home parish. Dad was quite a dancer but mom did it better, because she had to do it backwards and in heels like Ginger Rogers when she danced with Fred Astaire.

Our mom was only 4’ 10” but the night of her retirement party she stood about ten feet tall as she heard the accolades and applause from her supervisors and coworkers. She was a shy person who was uncomfortable in the limelight. But this night was different. She felt fully recognized for the hard work and devotion that she had put into her job. She retired after 51 years of service with the US

Mom’s retirement allowed her to care for our dad, but in her free time she discovered a wonderful country called Spain. She and a gaggle of friends, took several trips to Spain and the best part was having wine with every meal. Our dad died a few weeks shy of their 59th anniversary and mom retreated into her mourning. As she ventured back out into the world she returned to volunteering  with the Auxiliary for the Laredo Medical Center, at the front desk and gift shop. She treasured her time there and the friendships she developed lasted until the end of her days.

She was a member of various clubs, Catholic Daughters of America, Court Isabella # 683, Auxiliary to The Laredo Medical Center, Tuesday Music & Literature Club, The Bunco/Poker Group and The Birthday Clubs.

The family will receive guests at 9:00 a.m. Saturday, May 8th at Christ the King Catholic Church. At 9:30 a.m. a Rosary will be recited by a member of the Catholic Daughters, Court Isabella # 683.  The Funeral Mass will begin at 10:00 a.m. immediately after the Rosary. The Internment will follow to the Family Plot at The Calvary Catholic Cemetery.

Our Mother, Delia Irma Martinez Leal was a kind and decent woman who loved her family, friends and her community very much. She will be missed greatly.

Due to the Covid pandemic and for everyone’s safety, we kindly ask that you wear a mask, and continue to practice social distancing.

To order memorial trees or send flowers to the family in memory of Delia Leal, please visit our flower store.