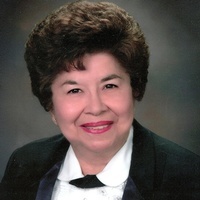 The Supreme Commander has called his servant, Blanca Elena Varela Nalaschi, CSM, US Army Retired, age 78, into his presence. Her soul now rests in peace after having faithfully served her family, country and God.

Born on January 8, 1941 to David B. Varela and Maria Antonia Villarreal de Varela in Laredo, Texas and subsequently was raised in this great city. She orphaned at ten when her mother passed away. Her aunt Gregoria and her grandfather became her legal guardians. She was raised together with her cousins: Dr. Erma Valdez and Dr. Daniel Valdez, whom shared in their lovely home on Grant Street. Blanca started her Catholic education at age 5 at St. John Bosco School in Kindergarten and then went on to St. Augustine School for the remainder of her elementary, middle and high school years, having graduated from St. Augustine in May of 1959. She loved participating in various school activities, such as the May Coronation of the Blessed Virgin Mary, School Theatrical productions, school library and helping out at the school cafeteria.

After her high school education was complete, Blanca wanted to continue her education, but due to financial constraints, her family could not afford to send her to college at that time, but Blanca never lost hope and in her faith, she prayed to God to show her a way to continue her education. Four days after her graduation, God answered her prayers. It was during a day out with her aunt at the local downtown shops that she came upon an “Uncle Sam” poster pointing his finger and with the caption, “I WANT YOU”. She asked her aunt as to what requirements there were to join the US Army and she responded, “Why don’t you go in and find out?”

Upon her initial interview with the local recruiter, Blanca took the exam and passed with flying colors. After a few phone calls were made, Blanca’s clothes and belongings were packed and she was on her way to Fort Sam Houston the very next day for her physical and to complete her processing. On May 30, 1959, she took the oath of enlistment and left for basic training at Fort McClellan, Alabama, home of the Women’s Army Corps. After her basic training was complete, she stayed there another 8 weeks for Advanced Individual Training and upon her advanced training was successful, she was sent to Washington, DC for her first assignment and what was the beginning of a very rewarding and wonderful career.

In 1962, her grandfather passed away and she took her aunt, who had raised since 10 years of age to live with her as her dependent. Thanks to this, she was able to travel with Blanca wherever the Army sent her. She started her post-secondary education while stationed in DC at George Washington University and when she was transferred to Fort Sam Houston, she continued and graduated from San Antonio College and transferred to University of the Incarnate Word during off-duty hours. As her career was advancing, Blanca also attended University of El Paso, while being stationed at Fort Bliss for Sergeants’ Major Academy.

In July of 1992, her aunt had a stroke and being that she was only two years from retirement, Blanca decided that she would return home, to the place that saw her grow. She contracted to have a house built here in Laredo. During the preceding months, Blanca saw a friend that she had met twenty years before in Okinawa, Japan. They started dating and shortly after, he proposed, and Blanca having that Laredo blood in her, told him the answer would be yes, if and only if he would return to live with her in Laredo after her retirement. He said yes and they wed at the Aberdeen Proving Ground in Maryland in May of 1993. Blanca retired on December 31, 1993 and returned to spend the rest of her earthly life in Laredo.

When asked about her decision to join the military Blanca said this , “I made a great choice when I became a military woman, because I wholeheartedly loved what I did, even though I had very challenging assignments. I always asked God to help and guide me so that I could serve my country well, and with the help and support of my aunt, the longer I stayed, the more I loved the Army. I give credit to the officers and non-commissioned officers who gave me the opportunity to excel in my military career.”

As we write her final biography and prepare to entrust her earthly remains to that holy ground, the following can be said of Blanca from her own words:

“She was a woman of great faith, valor, love, who prospered in a career that typically was reserved for men. Blanca broke many barriers. In the US Military, she became the first enlisted woman to hold the highest rank of Command Sergeant Major, the first to be selected by congress to remain on Active Duty for over 30 years, having retired at 35 years of service.” Blanca also left us advice: “Seek roles in life that can make a difference to you, your community, and your Country!” “Set a goal to continue your education so that you can keep up with the times and remain competitive. Organize your time, duties and set priorities. There is room at the top for all that are willing to WORK to EXCEL. It is essential that you strive to excel at whatever your calling is from God. Today, more than ever, opportunities abound for all that are willing to put forth the effort. This may involve a change in location or other sacrifices, but it is in the flexibility that makes the difference between success or failure.”

May Blanca’s words reach out to you and that the life she lived, teach us to be humble, servient, blessed. Into the arms of the Supreme Commander, do we now return your body, to rest in eternal slumber until you awaken again when God calls us home both body and spirit on the last day. You have completed what is true in the Soldier’s Creed :

“I am an American Soldier. I am a Warrior and a member of a team. I serve the people of the United States and live the Army Values. I will always place the mission first. I will never accept defeat. I will never quit. I will never leave a fallen comrade. I am disciplined, physically and mentally tough, trained and proficient in my Warrior tasks and drills. I always maintain my arms, my equipment and myself. I am an expert and I am a professional. I stand ready to deploy, engage, and destroy the enemies of the United States of America in close combat. I am a guardian of freedom and the American way of life. I am an American Soldier.”

Left behind to cherish her memory are her family whom she loved and always sought after: Dr. Erma S. Valdez of Vero Beach, FL, Dr. Daniel M. (Enid) Valdez of Weston, FL; nieces and nephews: Daniel K. (Erin) Whitehead, Esq. of Yorktown, IN, Rickey Whitehead of Anderson, IN, Troy (Lizandra) Varela of Orlando, FL, and Kerri Valdez Torres; and her close Laredo friends, whom she considered family: Irene Valdez, Ana Salinas, and Janie Posadas.

The Funeral Procession will depart at 10:30 a.m. from the funeral chapel to St. Patrick Catholic Church, 555 E. Del Mar Blvd., for a Mass of Christian Burial to be celebrated at 11 a.m.

Rite of Committal with Full Military Honors will continue to the Mausoleum at the Calvary Catholic Cemetery. She will be entombed next to her beloved Nana.

Full military honors will be rendered crypt side by Fort Sam Houston Casualty Detail from San Antonio and the American Legion Post 59 of Laredo.

Calvary Catholic Cemetery
To order memorial trees or send flowers to the family in memory of CSM Retired, please visit our flower store.