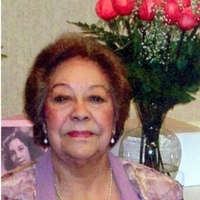 Mrs. Alicia Maldonado Charles, 99, beloved mother, grandmother, great-grandmother, sister, aunt, godmother and friend passed away Sunday February 3, 2019. She has gone to be with our Lord and God in heaven.

Mrs. Alicia Maldonado Charles was born January 27, 1920 in Cuidad Juarez, Chihuahua Mexico. She was the daughter of Mr. Benancio Maldonado Sr., a prominent rancher and politician, and Mrs. Maria de Jesus Tellez Maldonado. She was raised on Sencue Ranch until she started her formal schooling in the city of Cuidad Juarez at Emilio Caranza, and later in El Paso, Texas. She attended Sacred Heart Parochial School, graduated from Lilia Patterson Private High School, attended Palmer Business College, and graduated from El Paso International Business College with a Degree in Business and Accounting.

As a young woman, growing up in Mexico, she recognized the importance of getting an education, and instilled this value with her children.

In school she was an excellent student who excelled in her studies. She also showed her abilities as an athlete by playing baseball (pitcher), and basketball.

At an early age, her father encouraged her to be the best in whatever she did. In 1928, she was asked to recite a poem at the inauguration opening of the International Bridge in Cuidad Juarez before the President of Mexico, Plutarco Elias Calles, who in turn gave her an award for her outstanding accomplishments in school.

On December the 7th of 1945, her father, who was her role model suffered a heart attack, and passed away.

Her career began 1940 in retail and by 1943 she was managing four retail stores as a purchaser of fine linens and jewelry which she purchased when traveling to the interior of Mexico. On one such occasion, she met her future husband, Johnny, who was on leave from the war after the Invasion of Normandy, where he was a paratrooper.

After his discharge from the army, and a year and half of traveling from Laredo to Cuidad Juarez he convinced her to marry him on October 11, 1947. They traveled extensively throughout Mexico, while he was working with United States Government.

Mother worked in the business community as a cosmetician. When she lost her husband at such a young age she continued to work, and take care of her husband’s real estate investment.

With her children still in college, her encouragement to them was to never under estimate their talents. She continued to guide and support them until they finished college and began their careers. Mother was a person of high standards, values, and expectations.

Mother loved to make her pastries and special meals for her family when they came to visit especially for the holidays of Thanksgiving, Christmas Eve, and Christmas day. She had the house full with her children and grandchildren. Come Christmas, gifts were carefully selected for all her love ones.

Our beloved mother is also a cancer survivor, since1983. A devout catholic, and firm believer in the values of higher education. Alicia was exceptionally proud of the accomplishments of her children who all have college degrees. She constantly stressed the importance of religion, education to her children, and later to her grandchildren.

Her final years she spent in care of her youngest son, Glenn, until her death.

A lifetime member of the Franciscan Order in Cuidad Juarez, a member of Blessed Sacrament Church, and Altar Society, as well as The Catholic Daughter of the Americas Court Isabella NO. 683, since 1981 where she helped in different duties until she could no longer attend the meetings, The Girl’s Birthday Club, and former member of The Laredo Kidney Foundation.

The family would like to express their utmost gratitude to Dr. Luis M. Benavides and staff and a special thank you to our neighbor and good friend, Miss. Suzie M. Schafer for bringing our mother communion and prayers, over the past years and to Ms. Belinda Pena for time she helped and spent with our mother. The Staff of Nurses on Wheels especially Nora, Mari, and Jesus for assisting our mother in caring for her in final days at her home.

The family will be receiving condolences on Wednesday evening, February 6, 2019 from 6 to 9 p.m. at Joe Jackson Heights Funeral Chapels & Cremation Services, 719 Loring at Cortez. A rosary will be recited by The Catholic Daughter of America Court Isabella No. 683 at 6:30 p.m. and a second rosary for the deceased at 7:00 p.m.

Funeral Services will be held on Thursday morning, February 07, 2019 departing at 9:30 a.m. from Joe Jackson Heights Funeral Chapels to Blessed Sacrament Catholic Church for a Mass of Christian Burial at 10:00 a.m.

Rite of Committal and Interment will follow at the family plot in the Calvary Catholic Cemetery, Altar Section.

Calvary Catholic Cemetery
To order memorial trees or send flowers to the family in memory of Alicia Charles, please visit our flower store.