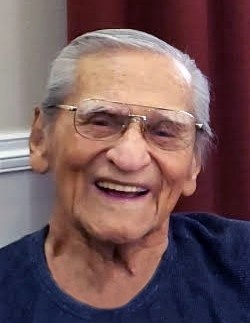 Mr. Abraham Guevara Gonzalez, 94, entered into the arms of his heavenly father on Friday, December 13, 2019.  Born on December 17, 1924 in San Marcos, Texas to Juan and Amelia Gonzales.  Abraham and his loving wife, Belia created a beautiful marriage of 74 years and spent most of their time in San Antonio.  Abraham was a proud member of the United States Armed Forces, having honorably served in the US Navy.  Later on in life, both came down to reside in Laredo, where their youngest daughter lived.

He is preceded in death by his parents: Juan and Amelia Gonzalez; brother: Juan Gonzales Jr.; his beloved daughters: Linda Gonzales and Brenda Gonzales.

To order memorial trees or send flowers to the family in memory of Abraham Gonzales, please visit our flower store.

No services to be held