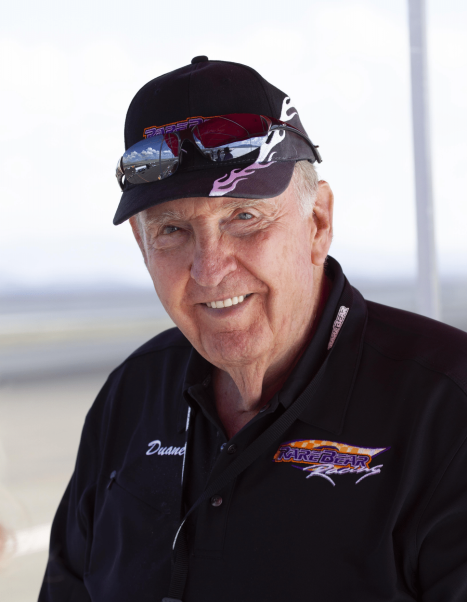 Duane Lewis, a loving father, and devoted husband for 68 years to Marceline Lewis peacefully passed away on April 12, 2022.

Duane was born in Des Moines, Iowa on December 2, 1934, to Celia and Clifford D. Lewis. He graduated high school, and later went on to obtain a degree in economics from the University of Nebraska.

Duane enlisted in the United States Airforce at the age of 19 where he was later commissioned and earned his wings in 1955. He served as a fighter pilot flying F100s and an instructor pilot flying the T33. He retired as Lieutenant Colonel after 22 years of service. In 1972 he flew the last formation of T38s and parked the aircraft nose to nose signifying the base operations were being shut down at the Laredo Air Force Base. After retiring from the USAF, Duane worked at Laredo National Bank where he enjoyed 22 years of his second career. His first role with LNB was as a jet pilot. Because of Duane’s discipline and leadership skills he gained in the Air Force, he eventually rose to Executive Vice President. After retirement from Laredo National Bank, Duane went on to his third career working with his son, Rod, continuing to build their family business that Duane helped finance and advise in 1982. Duane joined Lewis Energy Group full time in 2000, his business acumen, knowledge of finance, and management of team members, were invaluable to the growth of the family business. Duane enriched the lives of Lewis Energy’s team members during the 22 years he was there with his leadership and genuine care for everyone he worked with. He continued to frequent the office up until his passing. Duane had many passions in his life which include flying, traveling, ranching, love for his pets, spending time with family and the game of golf. Duane flew his Cessna 210 until he was 85 years old enjoying giving rides around the ranch to family members and friends. He passed his passion for aviation down to many of his children and grandchildren, many of whom are now accomplished pilots.

He passed on April 12, at the age of 87. Viewing and prayer services will be held at Joe Jackson North Funeral Chapels, 1410 Jacaman Rd, Laredo, TX 78041 on Wednesday, April 20, at 5pm-7pm followed by a Military Recognition.

To order memorial trees or send flowers to the family in memory of Duane Laverne Lewis, please visit our flower store.