The idea of a complete funeral home in Laredo at the turn of the 19th century was non-existent. Only in larger cities was this service available. In the late 1800s the local livery stable was a common place to rent a horse and wagon to transport the deceased to the cemetery, thus from there evolved the Funeral Chapel as we know it today.

A gentleman by the name of John Convery owned the local livery stable/undertaking parlor. In 1913, Mr. Convery decided to visit his relatives in Ireland, and asked a funeral director in San Antonio if he knew anyone who would come to Laredo and run the livery undertaking parlor for several months. 25-year-old Henry L. Jackson, unmarried, was working for a firm in San Antonio at the time, and seeing an opportunity, volunteered. Unfortunately, Mr. Convery became ill on his trip and shortly after his return to Laredo passed away. Several years later Mrs. Convery offered the establishment to the recently married Jackson. The livery stable gradually became obsolete and the renovated building was strictly utilized for funerals. In those years most of the wakes were held in the decedent's residence, and very slowly the trend was to have the wake, which was an all night affair, at the funeral home. This was so much more convenient for the family for several reasons, most importantly, the residence became a place of refuge. Mr. Jackson became the trusted person to call when someone had passed away.

Around this period, the State of Texas required persons who were in the profession to become licensed to embalm and conduct funerals. Henry took the examination and received his license #356 on May 10, 1935. At the time of his death in 1973, Mr. H. L. Jackson was the oldest licensed Mortician in the state of Texas. The livery stable/undertaking parlor at 1319 Farragut underwent several major changes and became transformed to a Funeral Home as the next generation of Jacksons came on the scene. H. L. Jackson Funeral Home became H. L. Jackson and Sons and ultimately to Jackson Funeral Home. 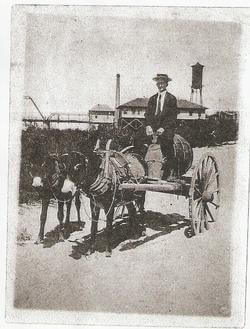 Visit www.prepaidfunerals.texas.gov for information relating to the purchase of pre-need funeral contracts including descriptions of the trust and insurance funding options available under state law.

We stand ready to assist you. If a death has occurred, please call us on the number below: